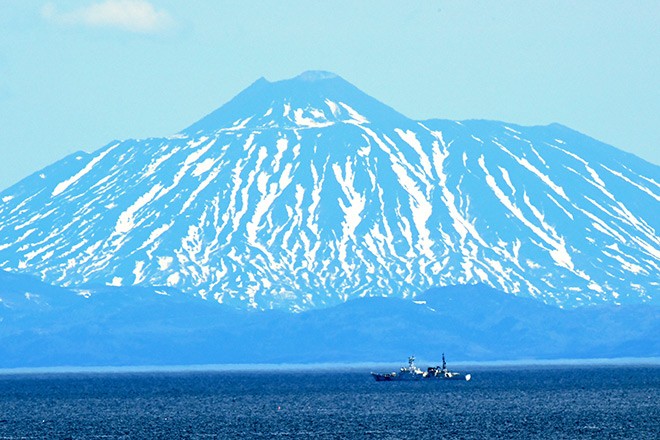 A Japan Coast Guard vessel searches for missing passengers of the Kazu I tour boat along the Shiretoko Peninsula in Hokkaido on May 15. Seen in the background is Kunashiri island, part of the disputed Northern Territories. (Asahi Shimbun file photo)

Russia has likely identified two human bodies found on Kunashiri island as missing people who were aboard the sunken Kazu I tour boat, according to sources.

The sources said the Russians had notified Japanese officials by June 23 that DNA samples taken from the two bodies matched those of Akira Soyama, 27, a male crew member of the boat, and a female passenger from Hokkaido.

The Kazu I sank in rough seas off the Shiretoko Peninsula, eastern Hokkaido, on April 23 with 26 passengers and crew members aboard. Fourteen bodies have been recovered while 12 people remain missing.

Japanese officials on June 9 sent data on the missing people to the Russians, who reported in May the discovery of the two bodies on Kunashiri island, part of the disputed Northern Territories.

The Northern Territories are islands off the coast of Hokkaido seized by the Soviet Union at the end of World War II and are claimed by Tokyo.

Japanese and Russian officials will decide on how to transport the two bodies back to Japan, where another DNA analysis will be done to double-check their identities, according to the sources.