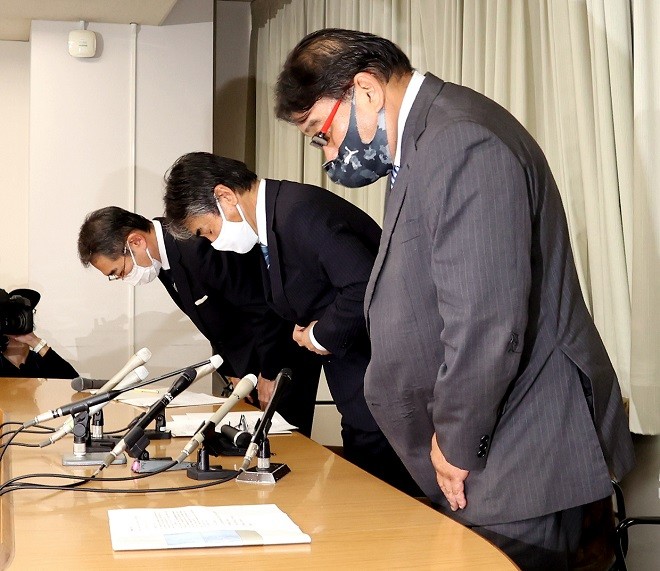 Top officials of Biprogy Inc., which was contracted by the Amagasaki city government during its COVID-19 relief subsidy program, apologize at a June 24 news conference for the temporary loss of a USB memory stick that contained personal information on all of the city’s 460,000 residents. (Yoshiaki Arai)

The loss of stored personal information is hardly a new thing.

Customer lists can be inadvertently left behind in trains, and gusts of winds can blow away filled-out questionnaire forms.

Back when personal information was committed to paper, I imagine that any loss would have been in the order of hundreds of entries at most.

But in the digital age, there is often no upper limit.

In a case that occurred in Amagasaki, Hyogo Prefecture, an employee of a company subcontracted by the city authorities lost a USB memory stick containing personal information on all 460,000 Amagasaki residents, including their names, addresses, dates of birth and amounts of resident tax they paid.

In a worst case scenario, it was feared the data could be used fraudulently or for other criminal purposes.

When the flash drive turned up June 24, many residents must have felt relieved, at least temporarily.

Still, the laxness of the people entrusted with the responsibility of handling such a vast quantity of data is disconcerting.

This sorry episode began when an employee put the memory stick in his bag without authorization and went to a bar, where he got so hammered he fell asleep in the street.

At a news conference held after the loss of the USB device came to light, a city official gave away the memory setting of the password length, unwittingly providing a clue to accessing the file.

Digitalization has made life convenient, but it also places greater responsibility on every member of society.

Many government offices and private corporations store information digitally which, if leaked, could lead to devastating consequences. Just an elementary human error, let alone a cyberattack, could prove fatal.

In this digital era, it is probably inappropriate for me to write that the citizens of Amagasaki were “relieved” by the recovery of the missing flash drive.

I say this because there is no knowing if someone has already taken a peek at the stored information.