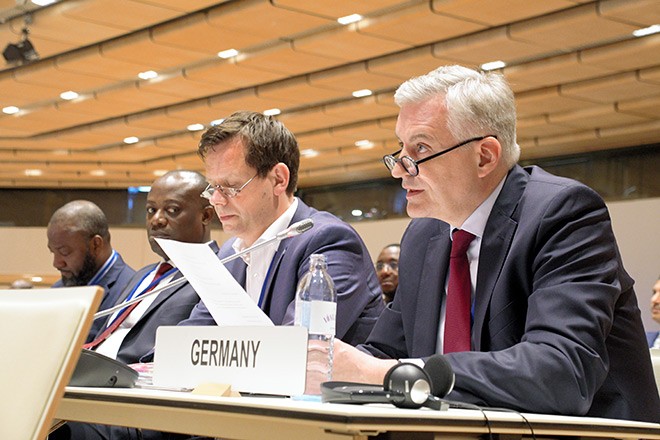 A delegate from Germany speaks during the first meeting of parties to the U.N. Treaty on the Prohibition of Nuclear Weapons in Vienna on June 22. (Tabito Fukutomi)

Countries that do not possess nuclear arsenals are reaching out to nuclear-armed nations to reduce and eventually scrap their stockpiles. It falls to the nuclear powers to sincerely respond to this call in light of their responsibility to explore ways of cooperation between the opposing camps.

The first meeting of parties to the U.N. Treaty on the Prohibition of Nuclear Weapons (TPNW) recently wound up in Vienna. More than 80 countries and territories took part in the three-day meeting, including 34 nations that attended with observer status.

The number of participating countries was nearly twice as large as originally expected, apparently due to a widespread sense of crisis over growing threats by Russia to use nuclear weapons in its war against Ukraine, among other factors.

The Vienna Declaration and Action Plan adopted at the meeting denounced nuclear deterrence, the threat of using nuclear weapons to stop an enemy from attacking, as “fallacy.” The statement also criticized the nuclear powers and their allies protected under the U.S. nuclear umbrella for failing to take “serious steps to reduce their reliance on nuclear weapons.”

The treaty has raised concerns that it may pit the signatory countries against the nuclear powers and other nations opposed to it. The United States is among countries that have criticized the pact as being inconsistent with the Nuclear Non-proliferation Treaty (NPT), which came into force in 1970 and allows the United States, Russia, Britain, France and China to keep their nuclear arsenals.

The most notable outcome to emerge from the conference was a set of measures to overcome the rift between the two camps. While acknowledging the value of the NPT, the declaration set an action plan to promote the nuclear ban treaty, which included the appointment of an informal coordinator to articulate areas for cooperation between the TPNW and the NPT.

The TPNW signatories also agreed to require the nuclear powers to dispose of their nuclear arsenals within 10 years after ratifying the TPNW. It is significant that such a decision was made to prepare for a future when nuclear powers will join the treaty, even though that prospect remains a distant goal at this point.

Nonnuclear nations were right to seek dialogue with the nuclear powers instead of getting tied up with denouncing their policies. This approach will put pressure on the nuclear powers to respond positively to the call at the NPT review conference slated for August. It is a shame that Japan, as the only nation to have experienced wartime atomic bombings, was not represented at the TPNW conference.

Some members of the North Atlantic Treaty Organization (NATO), such as Germany and the Netherlands, took part in the event as observers. While stressing their policy of not joining the treaty, they pledged to continue “constructive dialogue” with other nations.

Why can’t the Japanese government support the goal of the future elimination of nuclear weapons and engage in debate over the issue at international conferences, even if it disagrees with the TPNW signatory nations about the prevailing security situation?

Japan cannot serve as a bridge between the nuclear powers and nonnuclear nations without taking part in such debate. Now that this fact is clear, the Kishida administration should rethink its policy and start participating in TPNW meetings from now on.

Despite the Japanese government’s no-show, Japanese atomic bomb survivors, or hibakusha, and young anti-nuclear activists featured prominently at the conference. Takashi Miyata, an 82-year-old survivor of the 1945 atomic bombing of Nagasaki, held talks with many refugees and war victims from Ukraine and Afghanistan during the gathering.

The action plan also calls for cooperation with civil society to increase signatory member nations. We earnestly hope that the citizens of Japan will continue to contribute to the promotion of the ideals of the treaty.