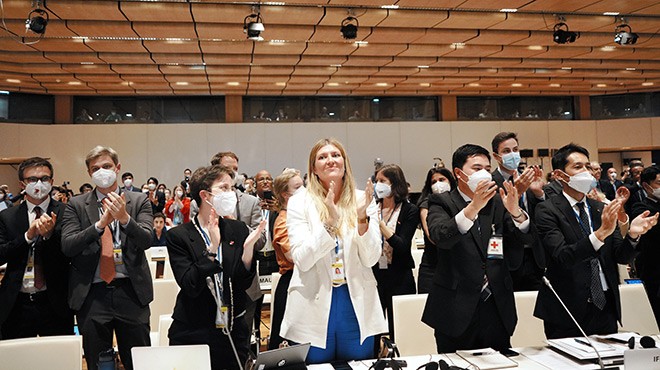 Participants at the first conference of signatories of the U.N. Treaty on the Prohibition of Nuclear Weapons in Vienna applaud at the conclusion of the meeting on June 23. (Jun Takaku)

VIENNA--Japanese participants to the first meeting of state parties to the U.N. Treaty on the Prohibition of Nuclear Weapons (TPNW) were generally enthusiastic about the outcome, but like others accepted the reality that without the presence of the nuclear powers, there is still a lot of work ahead.

Masao Tomonaga, 79, who was just a small boy living in Nagasaki when an atomic bomb leveled the city on Aug. 9, 1945, proclaimed that the conference on the whole was “a success.” He addressed the meeting on June 22.

He cited the unexpectedly high number of nations, 34, that attended in the capacity as observers even though they have not yet ratified the TPNW. Many expressed sympathy with the treaty’s objective of seeking a world where nuclear weapons no longer exist.

Tomonaga said hope could be held for the future because so many states called for dialogue with signatory nations.

“Observer nations hold the same goal, but they gave specific reasons for not being able to sign the treaty,” he added. “Those explanations were the same that the Japanese government has repeatedly made, so it should be able to participate in the next meeting (as an observer).”

The signatories plan to hold their next meeting in New York in November or December 2023.

Akira Kawasaki, a key official of the International Campaign to Abolish Nuclear Weapons (ICAN), said having NATO members such as Germany and Norway take part as observers was an expression of their belief that deepening discussions at the TPNW parties conference would be advantageous in encouraging further discussions at the review conference of the Nuclear Nonproliferation Treaty scheduled for August at U.N. headquarters in New York.

The ICAN was a driving force behind the TPNW, which was adopted in 2017 and led to the organization winning the Nobel Peace Prize the same year.

“The conference also made clear that the Japanese government’s explanation for not participating in the TPNW conference had no rational basis,” Kawasaki said.

Other participants expressed their appreciation for the three-day session with a 43-second standing ovation after the Vienna Declaration was adopted on June 23.

Alexander Kmentt, the Austrian official who presided over the conference, described the applause as “a very nice moment.”

Izumi Nakamitsu, the U.N. High Representative for Disarmament Affairs, was encouraged by the total of 83 nations that took part, including some of the 65 that have ratified the TPNW. She said her agency only initially expected about half the total number to attend.

However, other participants agreed the road ahead will not be easy.

The representative from Sweden, which took part as an observer, noted that none of the nuclear powers have signed the TPNW and described it as not “a realistic or effective way forward.”

At a news conference held after the conference wound up, Kmentt called for efforts to engage the nuclear powers “over time and through the strength of argument.”

Every additional nation that ratifies the treaty would be “another clear sign that the nuclear status quo is not acceptable,” he added.