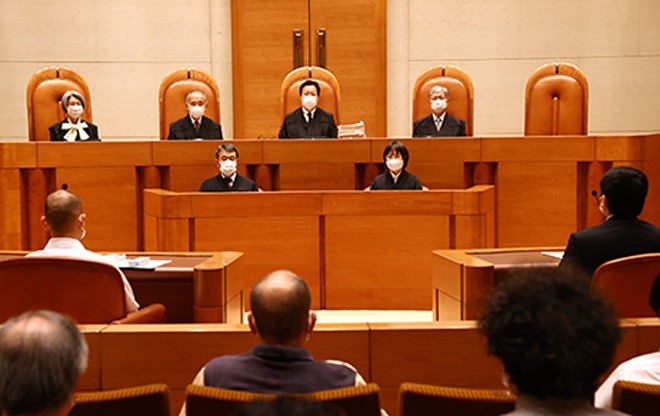 The Second Petty Bench of the Supreme Court on June 24 issues a ruling ordering Twitter to delete a tweet about a man’s arrest a decade ago. (Pool)

The Supreme Court, in a ruling expected to have wide-ranging ramifications, ordered Twitter to delete a tweet about a man’s arrest history a decade ago.

The individual was arrested in 2012 for trespassing, given a summary indictment and fined, which he paid. A tweet quoted from an article that identified him.

While the article itself can no longer be viewed online, a search for the man’s name brings up the tweet in question.

The man filed a lawsuit seeking the deletion of the tweet on grounds it invaded his privacy and hampered his efforts to find a job or make friends.

In 2017, the Supreme Court established guidelines for deleting posts about personal information, such as criminal records, from Google search results.

The guidelines set a high hurdle for deleting posts.

The court decreed that deletions could only be made when the protection of privacy was clearly more important than the search engine’s role of providing search results. It based its ruling on the fact that search engines are fundamental to the global dissemination of information.

The latest ruling by the Second Petty Bench of the Supreme Court on June 24 overturned a Tokyo High Court ruling that rejected the deletion request.

In addition, the top court lowered the hurdle for the deletion of tweets from the 2017 guidelines established for Google and said deletions were possible when protection of privacy was more important than providing search results.

The Supreme Court noted that the arrest occurred a decade ago and that the original article was no longer available over the internet.

It also pointed out that the 140-character limit on tweets was clearly intended to report breaking news and not for reading far into the future. For this reason, it concluded the tweet should be deleted.

Tomohiro Kanda, a lawyer who has handled numerous pleas to delete posts and tweets, said the 2017 guidelines had a huge effect on such requests even though it was originally meant for Google searches only.

Kanda said courts had until now almost never allowed for deletions of tweets.

According to the lawyer acting on behalf of the U.S.-based social networking site, the Google guidelines have been applied to Twitter in 11 rulings by high courts and 20 rulings in district courts.

The lawyer for the plaintiff said the relaxed guidelines set in the latest ruling by the Supreme Court could lead to more deletions of tweets found to invade a person’s privacy.