Bakeries in a bind over rising materials costs, what to charge 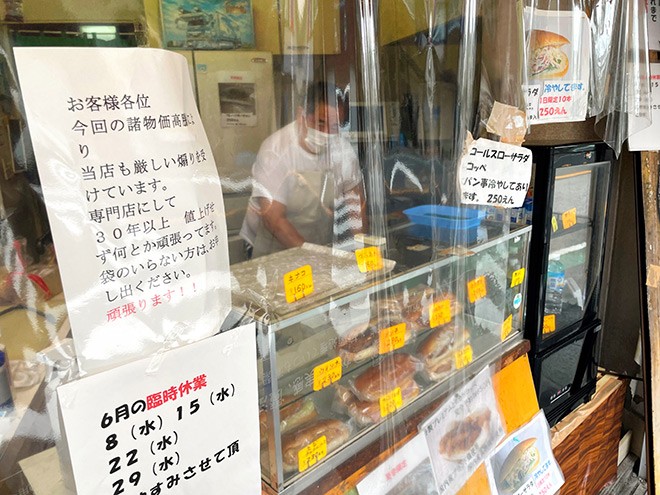 A bakery shop in Tokyo’s Arakawa Ward displays a notice that says it will maintain current prices of bread and pastries. This image was taken on June 16. (Kaho Matsuda)

It all comes down to dough. Rising prices of materials over the past year or so, combined with the sharp depreciation of the yen in recent months, are weighing heavily on bakeries.

Operators have done their utmost during this time to avoid passing on increases in the cost of raw materials for fear of losing customers but are fast reaching the point of no longer being able to do so.

The question in the minds of many businesses is what price can they get away with--without risking customer ire. Few options seem palatable.

The consumer price index for May rose by 2.1 percent from the same month in 2021, for the second consecutive month of increase, and there are fears it will continue to rise with more price waves of goods seemingly in the offing for the rest of the year.

Yoshio Sudo, who runs a long-established bakery shop in Tokyo’s Arakawa Ward, said he has kept the price of fried bread at 160 yen ($1.20) and filled and stuffed bread items at between 200 yen and 250 yen for more than 30 years.

Even when the rate of consumption tax was raised, he chose not to increase his prices so as not to turn off customers.

But he said the purchase price of wheat jumped by nearly 20 percent in March and cooking oil now costs almost twice as much as compared with three years ago.

Sudo, 65, said just raising prices by 10-20 yen would be meaningless. He reckons that an additional 50 yen or 80 yen per item would offset his increased costs.

“The problem is, bread with such a high price tag will not sell for sure,” he said.

For the time being, Sudo is keeping his prices the same.

But he knows it is just a matter of time before he has to raise his prices, if there is an additional 10-20 percent increase in the cost of materials.

The CPI’s growth is moderate compared with that of the corporate goods price index (CGPI), which surged by 9.1 percent in May from the same month in 2021.

The CGPI gauges prices for goods that Japanese companies charge each other, primarily based on domestic wholesale prices.

A key reason for the modest increase of the CPI is that shop operators by and large are absorbing steep increases in costs to retain their customer bases, according to corporate research company Teikoku Databank Ltd.

But some bakery shops have raised prices to ride out the hard times.

A bakery in the capital’s Koto Ward began selling a loaf of bread at 480 yen from April, up from 430 yen previously.

The hike was unavoidable, a shop assistant said, noting that sales had dropped by about 20 percent since the novel coronavirus pandemic struck in 2020. And the situation is now made even worse by the significantly weaker yen.