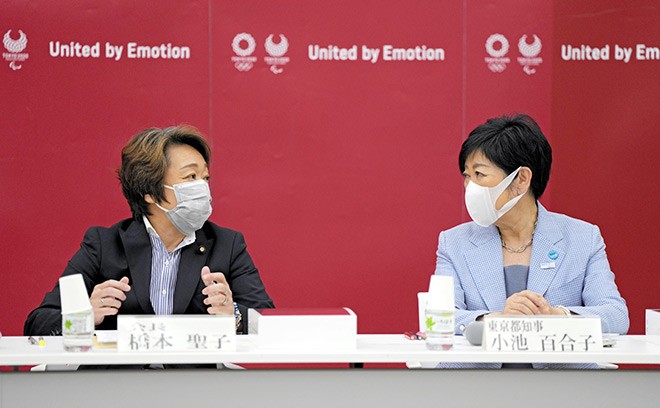 Seiko Hashimoto, left, president of the Tokyo Organizing Committee of the Olympic and Paralympic Games, talks with Tokyo Governor Yuriko Koike before an executive board meeting in Tokyo on June 21. The official report for the Tokyo Olympics and Paralympics was approved at the meeting. (Pool)

The Tokyo 2020 organizing committee’s report on the delayed Games held last summer is written in such a shoddy and self-centered manner we can only reiterate it is not even close to being the critical review it should have been.

The committee says the document, approved by its executive board on June 21, is intended to serve as an “intellectual asset that will leave hints and clues to the hosts and organizers of large-scale events” to be held in the future.

If that is indeed the case, the report should have faced up to the scandals and failures that accompanied the Olympics and Paralympics, analyzed their causes and drawn lessons from them.

But as it stands, the document is nothing but an evasion of accountability from cover to cover, just like a “review” report on the Games compiled by the committee late last year. The contents of the latest report are hardly likely to win the understanding of the public.

Who was responsible for the decision to postpone the Games by one year in the midst of the novel coronavirus pandemic? And on what grounds and through what discussions was the decision made?

What was the situation like when officials decided to forge ahead with the event a year behind schedule, despite the prolonged health crisis?

The report does not answer these questions.

Yoshiro Mori resigned as president of the organizing committee after he made misogynistic remarks. The report fails to point out that Olympic officials both in Japan and overseas did not initially regard his remarks as problematic.

In the report, the case was bundled up with scandals over key officials in charge of the Opening and Closing ceremonies who were replaced after uttering remarks that caused serious doubt about their human rights awareness.

The document noted that these cases “not only provided an opportunity for reaffirming the importance of diversity and harmony but also activated discussions across Japanese society.”

We are dumbfounded at the way the scandals are reviewed as if they had been positive achievements.

During the bidding process, the Games were touted as being aimed at “recovery and reconstruction” from the Great East Japan Earthquake, tsunami and Fukushima nuclear disasters of 2011.

That initial ideal was later consigned to oblivion, but the report contains no critical, or remorseful, review of that development.

On the whole, the document comes across as being written in a one-sided manner from the viewpoint of the organizers, precisely in the way the Tokyo Games were segregated from society at large that was suffering from the pandemic.

An opportunity should be set aside for a third-party review. That is another reason for relevant documents to be stored reliably and also disclosed readily in response to freedom-of-information requests.

The organizing committee will be disbanded at the end of this month. The liquidators taking over the body will face a test of their stance on the matter.

The organizing committee also closed the books of the Games. The expenses totaled 1.4238 trillion yen ($10.5 billion), nearly double the initial budget of 734 billion yen, which was presented in the candidature file during the bidding process.

In explaining the gap, parties, including the organizing committee, cited disparities in the items included in the counts. But taxpayers will hardly buy such reasoning.

Multiple factors are in the background. Officials strained to make the sum appear as small as possible in the stage of bidding. Sports federations wanted the best equipment and environment possible. The unilateral nature of the host city contract signed with the International Olympic Committee was also at play.

The Tokyo Games organizers are responsible, before the rest of the world, for questioning the IOC’s self-righteous mindset, which was highlighted by the decision to postpone and then forge ahead with the event, addressing the fundamental issue of a bloated Olympics and leading discussions for reform.

Unless they take that task upon themselves, they have no hope of touching the heartstrings of the public, however ardently they may talk about the dream of hosting the 2030 Winter Games in Sapporo.