Call to save electricity as heat takes toll on energy supply 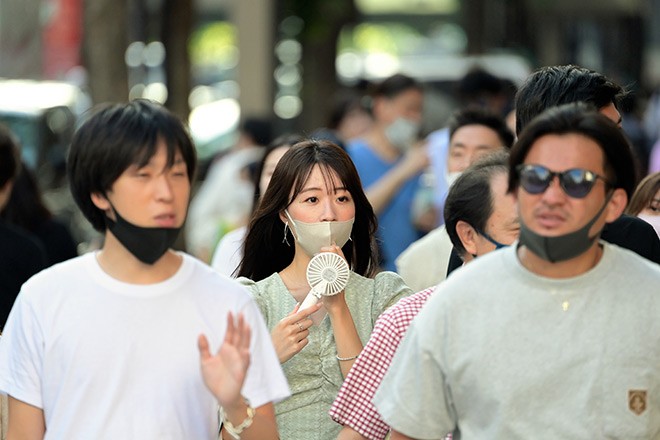 A pedestrian cools herself with a portable fan in the Ginza district of Tokyo on June 26 as unseasonal hot weather continues. (Kazushige Kobayashi)

The government issued a caution for households and businesses to conserve energy between the hours of 3 p.m. and 6 p.m. on June 27 as withering heat continued for a third day.

The directive, issued the day before as a precautionary measure against power outages, is for areas served by Tokyo Electric Power Co. Such directives are issued when the electricity reserve rate, or percentage of unused electricity, is predicted to drop to below 5 percent.

Officials said continuing unseasonal hot weather will likely cause the rate to drop to below 5 percent as people battle the oppressive heat with air conditioning. The hot weather is forecast to last for a while.

A reserve rate of at least 3 percent is essential to securing a stable supply of electricity, officials said.

A forecast by the Ministry of Economy, Trade and Industry as of 4 p.m. on June 26 said the areas in question will have an acceptable level of electricity supply until just after midday on June 27.

However, it said that as thermal power stations are not producing enough electricity, the electricity reserve rate is predicted to drop to between 3.7 to 4.7 percent from 4 p.m. to 5 p.m. on June 27.

Although these figures are sufficient to warrant an “alert for tight electricity supply,” the government said it would refrain from issuing one at the moment as the emergency borrowing of electricity from areas served by other major electricity companies will bring sufficient power to the areas concerned.

But it could still issue the alert if an unpredicted incident occurs, such as a supply stoppage at thermal power stations for some reason.

The government issues the alert when the electricity reserve rate is predicted to drop to below 3 percent.

In late March, it issued the alert for tight electricity supply for the Kanto and Tohoku regions for the first time.

However, it decided in May it would issue cautions when the outlook for electricity supply is tight, but not bad enough to warrant an alert, so as not to abruptly disrupt social activities.

Another concern is growing cases of heatstroke.

“We are asking the public to use air-conditioners appropriately, and refrain from using lighting unnecessarily,” a ministry official said.