Buddhist monks pay tribute to victims from the sunken Kazu I 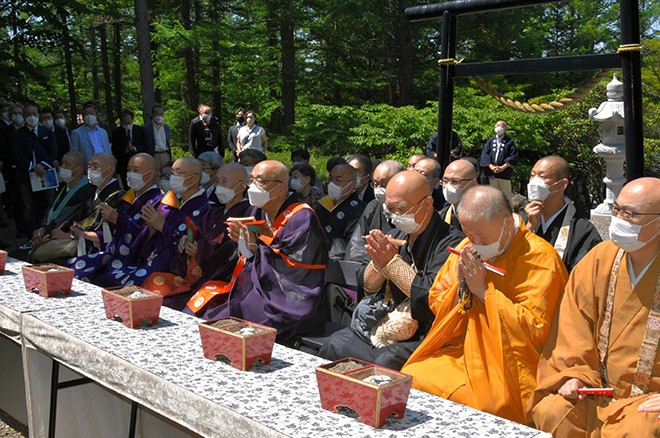 Buddhist monks from famous temples pray for the victims of the Kazu I tour boat disaster while Yasuki Fukushima, a chief priest of Hoshoji temple, reads sutras in Shari, Hokkaido, on June 26. (Takumi Okada)

SHARI, Hokkaido--Buddhist monks mourned here on June 26 for the victims of a tour boat that sank off the Shiretoko Peninsula in the prefecture in late April with 26 passengers and crew members on board.

A dozen people are still unaccounted for.

The monks, who hail from famous temples, and about 400 residents prayed for the early discovery of those still missing in the annual Buddhist memorial service held in Shiretoko Sando halls.

The monks prayed before an altar with boards dedicated to the victims placed behind it. The commemorative boards were made by Yasuki Fukushima, 79, chief priest of Hoshoji temple, and Tainen Miyagi, 90, chief priest of Shogoin temple.

About 15 monks took part, including those from Horyuji temple in Nara Prefecture, the Kyoto Buddhist Organization, and Hoshoji temple in Tokyo, along with several Kyoto temples: Shogoin temple, Kiyomizudera temple, Daikakuji temple and Sennyuji temple.

Shiretoko Sando traces back to 1995, when Bishamondo hall was built to worship the statue of Bishamonten (Vaisravana), the guardian deity of the North. The hall was built by Fukushima, the late writer Wahei Tatematsu and local nature activist Hiroshi Sano, 75.

Shiretoko Sando now consists of Bishamontendo hall and two other halls. It sits in a mountainous area, 20 to 30 minutes by car from the Utoro fishing port, where the Kazu I departed from.

The sightseeing boat sank in rough seas on April 23. Fourteen bodies have been recovered while 12 people remain missing. Russian officials said last week that DNA samples taken from two bodies found on Kunashiri island matched two people who were on the boat.

Kunashiri is one of four disputed islands called the Northern Territories, which Russia controls but Japan claims as part of its territory.