Over 900 dolls, called “teru teru bozu,” are on display at Shorenji temple in Gojo, Nara Prefecture, to pray for peace in Ukraine. (Shiro Nishihata) 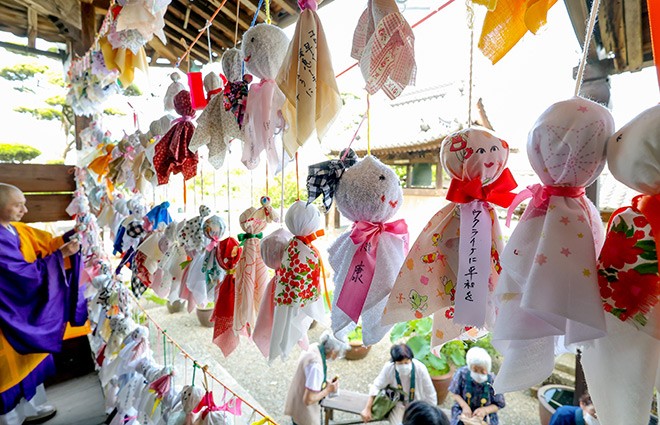 “Teru teru bozu” dolls with messages, such as “May peace be in Ukraine,” are displayed at Shorenji temple in Gojo, Nara Prefecture, on June 24. (Shiro Nishihata)

GOJO, Nara Prefecture--A temple here has decorated its premises with hundreds of dolls to pray for peace in Ukraine.

Shorenji, a temple in Gojo, Nara Prefecture, is a go-to place for people to pray for a sunny day by offering a doll called “teru teru bozu.”

The temple has asked people to pray for an end to the Russian invasion of Ukraine on its website.

The temple has also called for prayers to end the COVID-19 pandemic, as well as for a healthy life.

Some of the dolls are in blue and yellow colors, reminiscent of the Ukrainian flag.

Legend has it that a famed Buddhist monk named Kukai, also known as Kobo Daishi, prayed at the temple for fair weather on his way to Mount Koya.

The temple held a memorial service in front of the dolls on June 24.

Priests and locals chanted a Buddhist sutra, hoping peace will come to the world.

The temple will continue to ask for dolls until July 24, which will be on display on the temple grounds until Oct. 24.

They will be burned next spring.