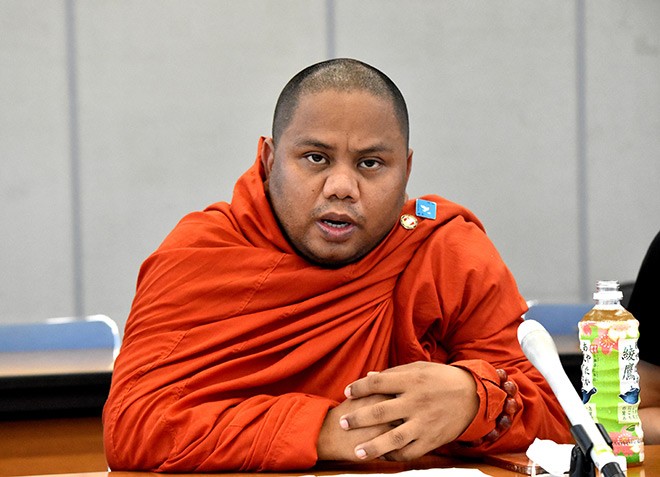 Ashin Htavara, a Buddhist monk from Myanmar, speaks to reporters in Osaka on June 23. (Ryo Miyazaki)

OSAKA--A Buddhist monk from Myanmar who was a leader of the Saffron Revolution urged the Japanese government to sever ties with his country’s military and recognize the pro-democracy National Unity Government as the legitimate one.

Ashin Htavara, 38, who helped lead the large-scale protests by Buddhist monks against Myanmar military rule in 2007, is visiting Japan to call for support for the NUG, formed after the Myanmar military seized power in a coup in February 2021.

At a news conference in Osaka on June 23, he said he is seeing fewer media reports on his homeland amid Russia’s continuing invasion of Ukraine.

“The military is indiscriminately killing young people with a future, raping women and burning many villages,” he said. “What is happening in Myanmar is also a serious global issue.”

Ashin Htavara called on the Japanese government to immediately end the practice of accepting members of the Myanmar military for an education and training program “if Japan values democracy.”

The Japanese government announced in April that three personnel from the military joined the program at the National Defense Academy, while another entered an officer candidate school of the Air Self-Defense Force this academic year, which started the same month.

Human Rights Watch, an international organization, has been criticizing the practice, saying Tokyo is providing support to the Myanmar military.

Ashin Htavara also urged Japanese companies with ties to the Myanmar military to stop doing business with it.

The Buddhist monk said he was standing near Kenji Nagai, a Japanese journalist, when he was shot dead while covering the Saffron Revolution in 2007.

Ashin Htavara subsequently sought asylum in Norway out of fear for his safety. He has since been based in the country to call for support for the pro-democracy movement in Myanmar.

He began raising funds for the NUG after last year’s military coup and recently visited the Netherlands and South Korea for that purpose.