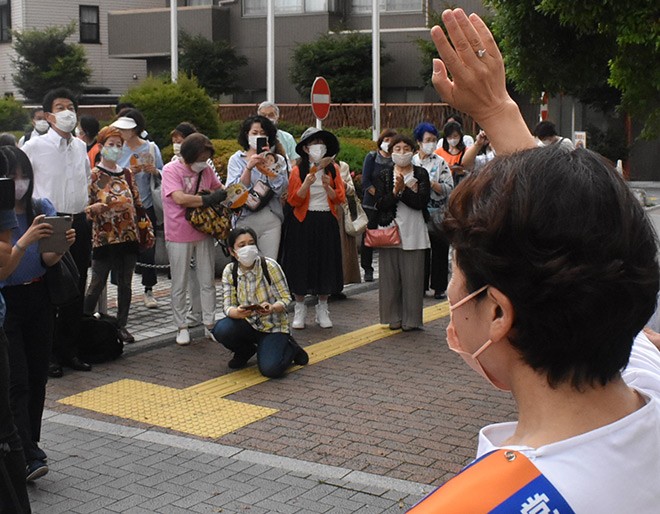 A female candidate running in the July 10 Upper House election acknowledges voters in Saitama on June 22. This photo is not directly related to this article. (Hidemasa Onishi)

A first-term female lawmaker was met with sneers from her male counterparts and supporters of her party when she raised her concerns about female candidates being exposed to sexual harassment from voters while campaigning. She urged those at the gathering to work to protect them from such unwarranted attention.

“Female candidates tend to encounter terrifying experiences during campaigning,” the woman said. “They become targets of sexual harassment. Some men even try to touch them.”

The meeting this past spring was held to discuss steps to support female candidates running in the Upper House election this summer, now set for July 10. All the other participants at the meeting were men.

The lawmaker recalled that she was flabbergasted by their reaction.

“I did not understand at all why they sneered at what I said,” she said. “Clearly, they have no idea of what women are likely to go through during campaigning. They are so out of touch with reality.”

The lawmaker’s comments were based on her own experiences.

She recalled an occasion when she was making a campaign speech and a man, a complete stranger, emerged from the crowd of onlookers to shoot a video of her up close. Another man grabbed her shoulder tightly. In another instance, a man claiming to be her supporter hugged her. When she tried to give a voter a fist bump, the man grabbed her hand as if to give her a massage.

“I could not say stop because I was caught totally by surprise,” she said. “My mind went a complete blank.”

She had been told by senior lawmakers and campaign staff that shaking hands with potential voters was key to garnering votes.

But as she met with more and more people during the campaign, she increasingly had unpleasant experiences.

As a result, she became very anxious about speaking before voters.

“Women are put at an enormous disadvantage from the point when they announced their candidacy,” she said. “Women need to be extremely tough to enter a race.”

Women account for 33.2 percent of all candidates in the upcoming Upper House election, surpassing the postwar 30-percent threshold for the first time in a national election.

The July 10 election will be the third national poll to be held since the candidate election gender parity law came into force in May 2018. The law seeks to balance the number of male and female candidates as equally as possible.

Female lawmakers are all too well aware that they face an uphill battle in altering the male-dominated Diet.

A female member of the Upper House recalled her bewilderment when a veteran male lawmaker addressed her in the Diet as “Miss, hey miss.”

She could not believe what she had just heard, given that she is a mother in her 40s.

When she looked at the man in astonishment, he sported an innocent smile, clearly having meant no harm in the way he addressed her.

“He and I are both lawmakers and are supposed to be equals,” she said. “I wondered why I had to be addressed that way.”

She took offense but responded with a forced smile.

She believes that the male-oriented atmosphere in the Diet will not change unless women stand up and are heard or occupy more seats in the two chambers.

Even when female candidates win their races, they then face the prospect of juggling their responsibilities as lawmakers while raising families.

Doing both is the most difficult part of being a lawmaker, according to several female first-term Diet members.

What makes it especially difficult is a deeply embedded notion in Japanese society that raising children is a woman’s responsibility.

Being a legislator is tough enough, regardless of gender, and the job can only be performed competently with the support of people around them.

A female legislator representing a constituency in western Japan bitterly recalled what a senior male member of her party told others when she had to decline a task he had set for her.

Her child was running a high fever at the time and needed to be taken to a hospital. But nobody was available to help her.

The senior member seemingly accepted her explanation, but she heard later that he told others she was using the same old lame excuse that her child was sick again.

“I feel I am always under silent pressure in the sense that the top priority for lawmakers is always getting the job done, no matter what,” she said.

Another female lawmaker said she misses out on almost all her child’s school events. When she returns to her constituency on weekends, she makes a point of showing up at gatherings and attending meetings of her supporters.

“You cannot continue to do this job unless you are ready to sacrifice everything in your life,” she said. “My rivals are doing all they can, even on holidays.”

But after a pause, she said that this way of doing things must end soon.

“The way we approach our job is certainly wrong,” she said. “Regardless of gender, lawmakers should be fully engaged in both raising their families and politics. Otherwise, the Diet cannot attract talent with diversity.”