VOX POPULI: As we remember WWI, we must not let history repeat itself 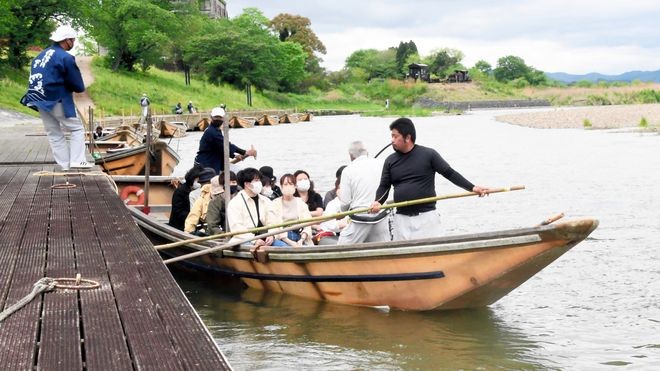 A boat leaves on a tour sailing down the Hozugawa river in Kameoka, Kyoto Prefecture, on April 27. (Asahi Shimbun file photo)

Sailing down the Hozugawa river in Kyoto Prefecture is akin to listening to a richly variegated symphony.

After a stretch of placid waters, the boat can suddenly find itself in roiling rapids. Egrets are seen hunting for fish and colorful "iwa tsutsuji" azalea bushes grace the mossy riverbanks.

I recently visited Hozukyo gorge, having learned that a certain distinguished person had cruised down this river in the summer of 1893.

That was the Archduke Franz Ferdinand (1863-1914), the heir apparent to the throne of Austria-Hungary, who fell to an assassin’s bullet on June 28, 1914, in Sarajevo. The incident triggered World War I.

Just before his 30th birthday, Franz Ferdinand set out on a global tour, wishing to "see the realities of the nations of the world."

He vividly chronicled his travels.

In his travelogue, translated into Japanese under the title of “Osutoria Kotaishi no Nihon Nikki” (The Austrian crown prince's Japan diary), he recalled to the effect, “I had resigned myself to our fragile boat being smashed into pieces when, just in the nick of time, the helmsman expertly maneuvered the boat to safety.”

The archduke’s untimely death at the age of 50 brought cataclysmic changes to the world. Political leaders became trapped in their own arrogance and miscalculations, and a global era of terror ensued.

Ship steering techniques have not changed since the Meiji Era (1868-1912).

“You keep riding the current in keeping with the law of the flow of the river, until you reach the crucial moment where you must make a judgment call to steer the boat away from a rock,” noted Tomoya Toyota, 56, director of the Hozugawa Yusen Sightseeing Boat Association.

This is precisely how a nation has to be steered. A wrong move at the crucial moment will not save the "ship"--the nation with its citizens--from doom.

Four months have elapsed since the Russian invasion of Ukraine. Contrary to President Vladimir Putin's calculations, the war is in for the long haul. Will the world learn from history and stop this calamitous chain reaction?

As I mulled this over, my boat reached its destination at Arashiyama in Kyoto.