EDITORIAL: Careful debate needed before seeking to amend the Constitution 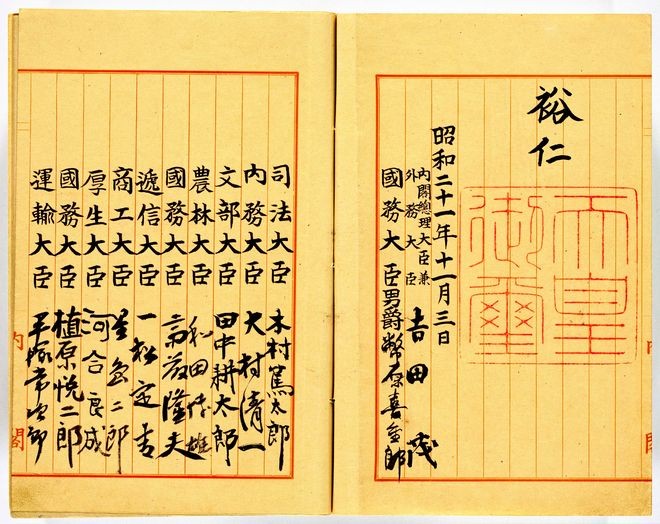 Emperor Hirohito's signature is seen on the top of the right page of the document to promulgate the Constitution. The document is stored in the National Archives of Japan. (Asahi Shimbun file photo)

The Constitution is the supreme law of the land that sets the fundamental principles by which the nation is governed and managed.

To amend the Constitution, it is vital to build a nonpartisan consensus based on broad public support through careful debate.

Any rash attempt to amend the Constitution by securing the number of votes in the Diet needed to initiate the process and setting a limited time frame for reaching the conclusion would undermine the foundation for good constitutional debate.

The outcome of the July 10 Upper House election could have a significant impact on the future of the nation.

The election could lead to a radical shift in Japan’s national security regime from the strictly restrictive defense policy it has maintained in the postwar period toward a fundamental enhancement of the nation’s defense capabilities including the acquisition of the ability to strike enemy bases.

The stances of the parties toward the Constitution are a key campaign topic.

The ruling Liberal Democratic Party’s campaign promises include four constitutional amendments including one to establish the status of the Self-Defense Forces as a constitutional entity and another to give the government the power to take strong policy actions in response to national emergencies.

These amendments have been part of the LDP’s policy platform for several years. The ruling party calls for instituting these amendments at “an early date.”

Nippon Ishin (Japan Innovation Party), a conservative opposition party, has added two proposals to its constitutional amendment agenda, which was focused on reforming the governing system.

One of the new proposals would amend the war-renouncing Article 9 to secure the SDF’s constitutionality while the other would introduce a provision for facilitating policy responses to national emergencies. The move has brought Nippon Ishin’s proposals closer to the LDP’s.

The Democratic Party for the People is also supportive of promoting constitutional debate, proposing to introduce a rule to extend the terms of Diet members during emergencies as an exceptional measure.

Komeito, the junior partner of the LDP in the ruling coalition, has yet to clarify its position on the proposal to constitutionalize the SDF’s status, citing it as an issue to be considered.

The main opposition Constitutional Democratic Party of Japan has expressed clear opposition to the LDP’s proposal to amend Article 9, while supporting debate on constitutional amendments for such steps as limiting the prime minister’s authority to dissolve the Lower House.

The CDP argues the proposed change to Article 9 would undermine the constitutional renouncement of “war as a sovereign right of the nation” and the ban on possessing armed forces.

The Japanese Communist Party has said it will oppose any change to any part of the Constitution, not only Article 9 but also all the articles, including the preamble.

It can't be said that the parties with widely different positions are moving toward a consensus. The LDP’s four proposals were developed four years ago under the administration of then Prime Minister Shinzo Abe, who was eager to amend the Constitution while in office.

But the Abe administration failed to generate political momentum to push the initiative as its “amendment for amendment’s sake” attitude and poor interest in engaging in serious debate on what kind of changes were really needed spread distrust and alarm among opposition parties while alienating many voters.

During a recent debate among party chiefs hosted by the Japan National Press Club, Prime Minister Fumio Kishida did not respond to Ishin’s call for setting a clear time frame for constitutional amendments.

However, Kishida pledged to promote debate on specific proposals in a way that can secure support from two-thirds of the members of both houses needed to initiate an amendment.

Kishida should learn from Abe’s botched amendment initiative and avoid rushing to push the agenda for the single purpose of rewriting the Constitution.

Some political pundits may say the COVID-19 pandemic and Russia’s invasion of Ukraine have created political tailwinds for constitutional amendments. To be sure, lawmakers need to address such vital policy questions as how to prepare for future pandemics and what kind of steps should be taken for Japan’s national security.

But they need to ask whether these challenges cannot be dealt with through simple revisions to the law. If constitutional amendments are really needed, they need to debate carefully which articles should be changed and in what ways.

A move to amend the Constitution cannot win broad public support unless all these vital specifics are made clear and debated thoroughly.

It should not be forgotten that we need to share common perceptions on constitutional amendments through careful consideration and thorough debate.