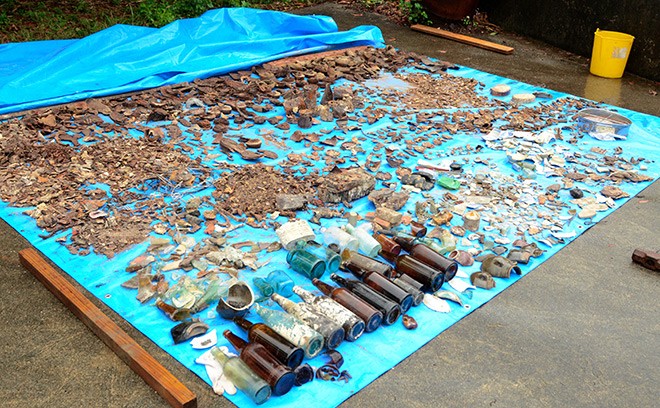 YAESE, Okinawa Prefecture--Mitsuo Matsunaga crawled inch by inch through a hole just large enough for an adult to fit through and descended two meters or so down a slope using a ladder and rope.

The light from his headlamp revealed a dark space surrounded by rocks inside the cave, where remnants from the 1945 Battle of Okinawa were scattered.

Matsunaga, 68, found several hundred items that had belonged to Imperial Japanese Army soldiers, such as mess tin lids inscribed with the names Hamaguchi and Fujimura and a fountain pen marked with a kanji character for “matsu” (pine).

There were also soles of combat boots, iron helmets, grenades and even human remains.

“No matter how many years pass by after the war, relics continue to be found,” said Matsunaga, who has been collecting wartime relics and remains for 30 years. “But whose belongings are they? There are no clues for many of them.”

Matsunaga rediscovered the cave, which was used as a shelter during the ground battle, over the past year or so in Yaese in the southern part of Okinawa’s main island.

Few locals knew it existed. Matsunaga located the cave after reading a local newspaper from about 40 years ago, in which a resident recalled that the shelter was littered with bones and unexploded shells immediately after the war.

Matsunaga keeps the relics he found with the hope of reuniting them with the bereaved families of their previous owners one day.

HARD TO TRACK DOWN FAMILIES

Volunteers, such as Matsunaga, have led efforts to collect and conserve remains and personal belongings of those who were killed during the war in Okinawa Prefecture, but they are growing old.

Isamu Kuniyoshi, 83, a pioneer engaged in search-and-return efforts for about six decades, retired six years ago due to his declining physical strength.

He experienced the Battle of Okinawa when he was 6 years old, losing his mother, elder brother and other kin.

Caves that he explored as a child were scattered with bones and relics.

“My father lost his family when he was small, and he might have been driven by his tragic experiences to collect war remains and relics,” said his third son, Mitsuo, 54.

Kuniyoshi has kept the retrieved items in an office section of his home in Naha, which is crammed with drinking cups, canteens, medicine bottles and other odds and ends.

He had unearthed several thousands of human remains and found more than 100,000 personal belongings.

But he was able to only return about 100 to bereaved families.

Kuniyoshi turned a corner of his office into a museum to exhibit the relics and convey the misery of the war, while he continued his efforts to find bereaved families.

But he eventually closed the museum because it became too difficult to manage the items.

'PROOF THEIR LOVED ONES HAD LIVED'

Tetsuji Hamada, 59, and his wife, Ritsuko, 57, who had worked with Kuniyoshi for about 20 years, proposed taking over managing some of the relics from him.

About 10 years ago, Hamada, who lives in Aomori Prefecture, found a personal seal with an uncommon family name in traditional characters in a cave in Itoman in the southern part of Okinawa’s main island.

Based on the location of the cave, he narrowed his search to a unit that was operating there during the war and discovered that the owner was a man from Hakodate, Hokkaido.

After their efforts to track down his bereaved family were featured on a TV program, the couple was contacted by a woman who said her husband’s older brother had owned the seal.

She said her husband, who had died, had been looking for his personal effects for many years.

The woman carefully held the personal seal in her hands and spoke to a photo of her husband’s older brother, saying that she was glad to see him come back.

The Hamadas also vividly remember a woman who lost her mother and older sister in the Battle of Okinawa. She did not even have a single piece of their remains or personal items.

The woman told the couple that she wanted to fall asleep while holding their belongings in her arms, even if it were the sole of a shoe or just a piece of it.

“For bereaved families, personal items--no matter what they are--are proof that their loved ones had lived,” Ritsuko said. “They are irreplaceable.”

MANY WILL NEVER BE RETURNED

The Hamadas took over approximately 150 pieces of canteens, mess tins and other relics on which names are written from Kuniyoshi to find the bereaved families they belong to.

The remaining items are expected to be stored at the Okinawa Prefectural Peace Memorial Museum.

But it is unlikely their owners will be identified once the items are housed at the museum.

“I feel disheartened as I think about the faces of those who are eagerly waiting to receive personal belongings (of their loved ones),” Hamada said.

“These relics would not have been left abandoned had the Japanese government made serious efforts to collect them. It is as if the very existence of the victims of the Battle of Okinawa were neglected.”