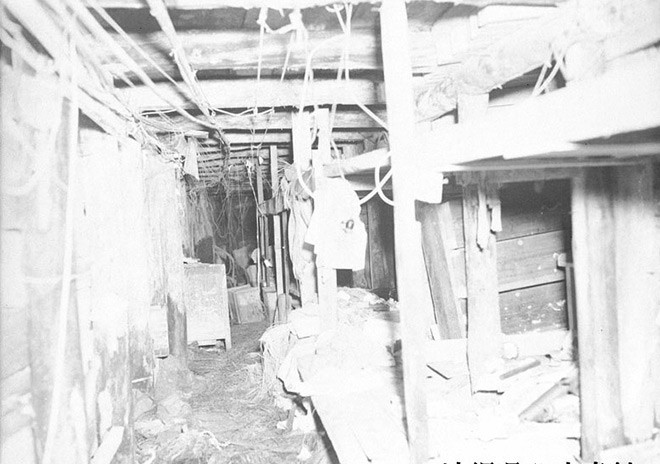 NAHA--Okinawa Prefecture will preserve the remains of the Imperial Japanese Army headquarters that served as a command post beneath Shuri-jo Castle here during the 1945 Battle of Okinawa.

As a step toward allowing public viewing of the site for the first time after World War II, the prefectural government later this fiscal year will examine a tunnel leading to the core of the underground complex.

The project could shed light on the decision-making process during the battle that ravaged the island prefecture 77 years ago in the closing days of the war.

The Imperial Japanese 32nd Army, which was tasked with defending the southwestern Nansei Islands, completed the complex 30 meters to 40 meters beneath Shuri-jo Castle by March 1945.

The site of the 32nd Army Underground Headquarters, as the complex was called, was chosen partly because the elevated ground on the surface provided a clear view of surrounding areas. In addition, the solid geological formations were expected to withstand attacks of U.S. troops.

Studies by the U.S. military and the prefectural government have shown the complex extends for about 1 kilometer in total length. It had five tunnels, five entrances and more than 30 chambers and zones, including the commander’s office and a kitchen.

A maximum of about 1,000 people are believed to have lived in the complex at one time before headquarters staff retreated to the south of the main Okinawa island.

The Imperial Japanese Army set off explosives in the complex to destroy confidential documents and other materials before the retreat, causing parts of the interior to collapse.

It has been left in that state because of safety concerns and other problems.

After a fire burned down Seiden (State Hall), Hokuden (North Hall) and other components of Shuri-jo Castle in 2019, calls emerged to preserve the complex for public viewing in tandem with the rebuilding of the castle.

The prefectural government set up a panel to study the matter and conducted geological and other research on the site.

A survey on the interior of Tunnel No. 1, which leads to the core of the complex, will start this fiscal year as part of a program commemorating the 50th anniversary of the prefecture’s return to Japanese sovereignty in 1972.

No one has set foot in the central part of the complex since the war because access has been blocked by the structural collapses. Historic materials may still exist deep inside.

The prefectural government also plans to buy private land plots around the complex’s Entrance No. 5 and allow public access as early as in fiscal 2025.

However, problems remain over restoring the complex’s interior, removing a large volume of groundwater and covering the expenses of the project.

“We hope to address those issues one by one,” a prefectural government official said.

Akio Gima, a resident of Naha, worked in the underground complex 77 years ago as a member of Tekketsu Kinnotai (Iron and Blood Imperial Corps) of male students. He was a first-year student at Okinawa Normal School at the time.

“There were lightbulbs on the ceiling and women in ‘monpe’ baggy work pants,” Gima, 94, said.

Gima said tramcar tracks ran along a tunnel from Entrance No. 5 on the south. He was assigned to load a tramcar with earth dug out by soldiers and to discard it outside.

“We kept digging until the very day headquarters staff retreated to the south,” Gima said, adding that many students were mobilized there. Some took care of power generators while others served as messengers.

More than 1,000 sites in the prefecture are estimated to contain structural and other remains from the Battle of Okinawa, including positions of the Imperial Japanese Army and natural caves where residents took shelter.

“If Shuri-jo symbolizes prosperity of the ancient Ryukyu Kingdom, the 32nd Army Underground Headquarters is a piece of negative legacy at the opposite extreme,” said Eiki Senaha, head of a civil advocacy group that is calling for the preservation of the complex for public viewing.

Shuri-jo Castle attracted 2.8 million of the 10 million tourists who visited the prefecture in 2018 before the novel coronavirus pandemic.

Senaha, 93, said he believes that public displays of the structure next to the popular castle would send out a stronger message of peace.

“That would allow visitors to learn about both the bright and dark sides of Okinawa,” he said.

Shinobu Yoshihama, a former professor with Okinawa International University, who is knowledgeable about the Battle of Okinawa, said, “War remains make more sense when they are seen as a string of components.”

Yoshihama, 72, serves on the prefectural government’s study panel on preserving the underground headquarters for public viewing.

The 32nd Army retreated to another underground headquarters in the Mabuni district of Itoman, at the southern tip of Okinawa’s main island, where the army ended organized combat on June 23, 1945. Many civilians died in the process.

The retreat to the south represents a key issue in critical studies of the Battle of Okinawa, Yoshihama said.

“Questions remain, such as why the decision to retreat was made, and what were the consequences,” the historian said. “Thinking of the underground complexes in Shuri and Mabuni as mutually connected allows you to see a clearer picture of the Battle of Okinawa.”

Sadamitsu Ushijima, grandson of Lt. Gen. Mitsuru Ushijima (1887-1945), who led the 32nd Army, said the underground complex in Shuri is related not just to Okinawa but also with all of Japan.

The 68-year-old resident of Tokyo has long been studying the 32nd Army Underground Headquarters.

The Imperial Japanese Army viewed Okinawa as a shield to defend the Japanese mainland and mobilized civilians of the southern prefecture for protracted warfare.

“An operation plan for defending the mainland was formulated at this underground headquarters, which led to a great death toll among Okinawans,” Ushijima said. “The site could serve as a place where mainlanders will reflect on the Battle of Okinawa as a matter of their own, not as someone else’s.”