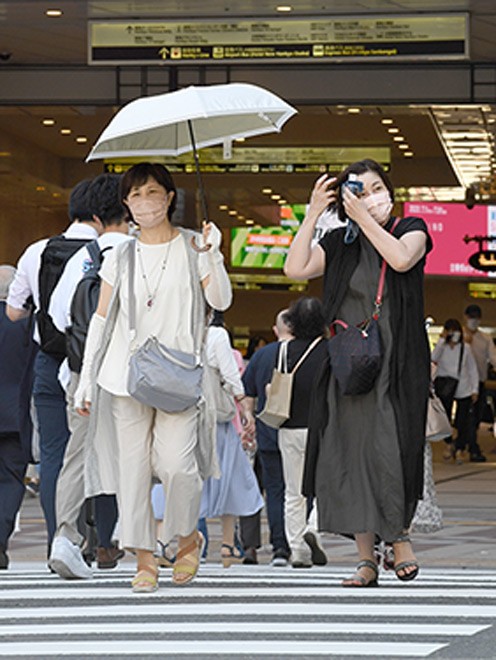 Pedestrians walk with a parasol and a portable fan under a blazing sun in Osaka’s downtown Umeda district on June 28. (Kenta Sujino)

The Japan Meteorological Agency announced on June 28 that rainy season appears to have ended for the Kinki, Hokuriku, Chugoku, Shikoku and northern Kyushu regions, the shortest duration for most since record-keeping began 70 years ago.

The end of rainy season came 19 to 25 days earlier than usual. If confirmed, it would be the first time for a June ending in these areas since statistics began being kept in 1951.

That would also mark the shortest rainy season on record except for the Hokuriku region.

The late start and early end brought the shortest rainy season on record in four regions.

The Hokuriku region logged 14 days, which was the second shortest following the record low 11 days set in 1958.

The JMA said rainy season ended sooner because westerly winds shifted northward. That made the high-pressure system over the Pacific Ocean to the south of Japan expand to the mainland of the country and pushed the seasonal rain front toward the north.

The announcement of the end of rainy season in the five regions was expected to be made on June 27 along with the end as well for the Kanto-Koshin, Tokai and the southern Kyushu regions.

However, since the weather was expected to deteriorate on the day in the five regions, the announcement was postponed a day.

After the announcement on June 28, rainy season appears to be continuing only in the Tohoku region.

The scorching summer heat is expected to continue on June 28 and the JMA is calling on the public to be vigilant of heatstroke.

As of the morning of the day, the agency forecast the mercury to hit 36 degrees in Nagoya, Fukui, Tottori and Kumagaya in Saitama Prefecture. Kyoto is expected to see a high of 35 degrees and a high of 34 degrees is forecast for central Tokyo, Fukuoka and Fukushima.