Japan and U.S. agree to cap the price of Russian oil imports 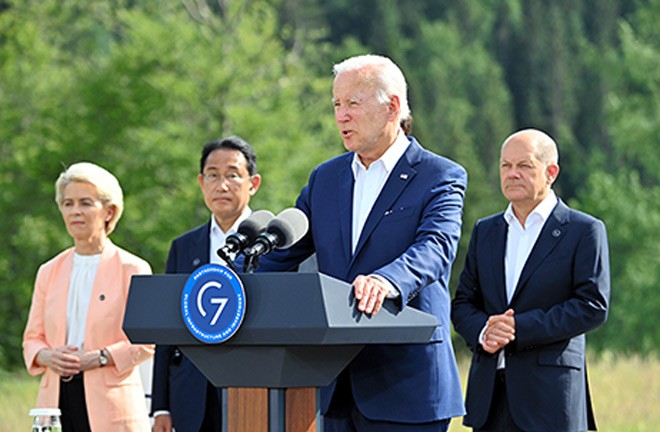 Prime Minister Fumio Kishida, second from left, at the Group of Seven summit in Elmau, Germany, on June 26. (Yosuke Fukudome)

ELMAU, Germany--Japan and the United States have agreed to cooperate on setting an upper limit on the price of Russian oil imports to squeeze revenues funding the war against Ukraine.

The two countries agreed to work together on a plan when their leaders met on the sidelines of the Group of Seven summit on June 26.

The move follows growing speculation that Moscow may have been channeling the bulk of its significantly expanded revenues from the steep rise in crude prices to finance its invasion of Ukraine.

Prior to the talks between Prime Minister Fumio Kishida and U.S. President Joe Biden, a senior U.S. government official told reporters that capping the price of oil shipped from Russia has been a major topic of discussion at the summit.

The official said G-7 leaders are close to deciding to instruct their Cabinet members with energy oversight to consider specific measures for the price cap.

According to a Japanese government official, the leaders have agreed on the importance of limiting the price of Russian oil.

The next focus of the discussion at the summit, which runs through June 28, will be agreeing on specific measures.

Washington has advocated curbing Russian oil prices for some time.

Many of the leading insurance providers for tankers and vessels transporting oil are based in the United States and Europe.

The U.S.-based Bloomberg News reported that participants at the G-7 summit are weighing allowing only the transport of Russian oil traded under a certain price.

G-7 countries have sanctioned Russia by imposing step-by-step embargoes on its oil since the invasion began in late February.

But that led to a tight supply-demand balance, resulting in a sharp spike in oil prices around the world.

With the price cap, G-7 leaders intend to slash Moscow’s oil revenues while still allowing it to be supplied.

(This article was written by Ken Sakakibara and Susumu Imaizumi.)