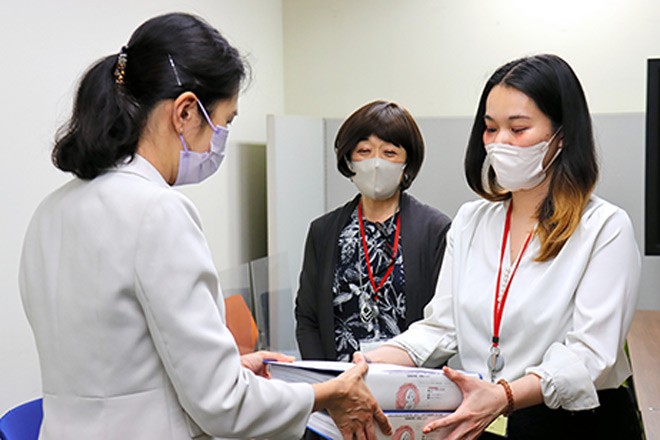 A group called Action for Safe Abortion Japan hands a petition to a health ministry official on June 27 to demand the abolishment of a rule that requires consent from pregnant women’s spouses for abortions. (Ryuichi Hisanaga)

Academics and midwives on June 27 submitted a petition to the health ministry demanding the removal of a legal clause that requires pregnant women to obtain the consent of their spouses to have abortions.

The petition, containing about 82,000 signatures, was organized by a group called Action for Safe Abortion Japan.

It argues that the clause in the Maternal Health Law robs women of their right to make decisions about their own bodies.

The law states that women can have an abortion only when it is physically or financially difficult to continue with the pregnancy or to give birth, or if the pregnancy was the result of rape and in certain other cases.

If pregnant women meet these conditions, their doctors must obtain consent from both the woman and her spouse, including common-law marriage partners, to perform an abortion.

Japan is among only around 10 countries or regions that require a spouse’s consent for a woman to have an abortion.

The United Nations’ Committee on the Elimination of Discrimination against Women has recommended that Japan remove the clause from the law, but the government has not held advanced discussions on revising the legislation.

In addition, a health ministry official said at a Diet session in May that as a general rule, pregnant women will be required to obtain consent from their spouses to take an abortion pill in compliance with the Maternal Health Law.

The ministry is currently assessing whether to approve what would be Japan’s first oral abortion medication.

The ministry official’s statement caused a backlash on social media, with people questioning why women are not allowed to decide on their own even about taking medication.

“Women have a right to a safe abortion,” said Kumi Tsukahara, a member of Action for Safe Abortion Japan and a part-time lecturer of gender studies at Kanazawa University. “In Japan, the general rule is that women cannot have an abortion without their spouses’ consent. It is wrong that women cannot make a decision about something that involves their own bodies.”

She said a health ministry official responded to the petition by saying, “The public, too, has various opinions (about the issue).”

Other organizations also voiced concerns about the spousal consent requirement for taking the abortion pill.

Kaori Nakajima, a midwife and representative director of nonprofit organization Piccolare, noted that not all pregnant women have a good relationship with their unborn babies’ fathers.

“I want the government to take into account cases in which pregnant women and their spouses have different views, or their spouses are not willing to sign the consent form for the abortion.”

(This article was written by Etsuko Akuzawa and Ryuichi Hisanaga.)