Former imperial family member is cautious about any royal return 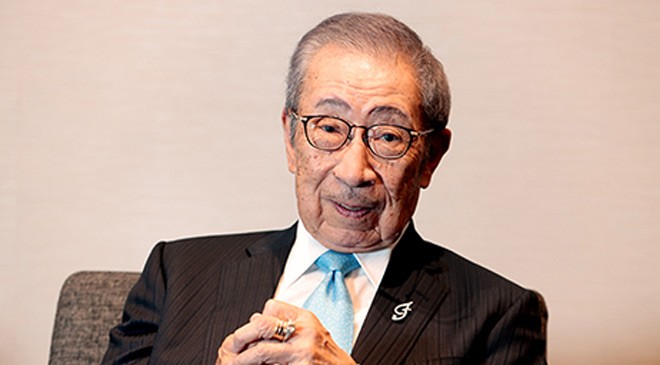 Hiroaki Fushimi has led a “double life”--first as a member of the imperial family and then as a commoner after the end of World War II.

Fushimi, 90, recently published a book whose title is tentatively translated as “Born to the Fushimi family, the head of the former imperial family houses.”

“We would have no choice but to follow if the emperor, as well as the government, tells us to return to the imperial family,” Fushimi noted in the book.

The comment caused a stir as he appeared to have a positive stand on returning to the imperial family. This came as the book was published in January following a panel of experts submitting a report to the government late last year that discussed measures to secure sufficient members of the ever-shrinking imperial family.

One of the proposals was allowing male offspring in the male line belonging to the imperial lineage, such as those in the Fushimi and other families, to regain their royal status by law.

When asked about his views during a recent interview with The Asahi Shimbun, however, Fushimi took a more cautious stance.

“There are various views,” he said. “I am going to see how future discussions will go.”

The root of his family dates about 600 years to the son of the emperor.

The Fushimi house is the head of 11 former imperial family houses.

Fushimi grew up in the sprawling family estate in central Tokyo, where Hotel New Otani now stands, until it was burned down during U.S. air raids during the war.

He took refuge with then Crown Prince Akihito in Nikko, Tochigi Prefecture, to the north of Tokyo during the war.

Fushimi became the head of the Fushimi house at 14 following the death of his grandfather in 1946.

His grandfather, Prince Hiroyasu, was a top commander of the Imperial Japanese Navy, heading the General Staff. The prince was a strong advocate of war against the United States and Britain.

When Japan’s defeat in the war appeared to be only a matter of time, Hiroyasu grew visibly dispirited.

His grandfather crossed a line through pictures of warships in his room whenever a sinking was announced.

“We don’t have many warships left,” Fushimi recalled his grandfather saying. “Japan is at the end of its rope.”

In 1947, after Japan’s defeat, all 11 houses were stripped of their membership in the imperial family and became commoners.

He later traveled to the United States to study, hoping to become a diplomat. After his return to Japan, he landed a position with an oil company.

Although he was no longer a member of the imperial family, employees of a prospective business partner that he pitched a business deal to were aware of his background and treated him to dinner while addressing him as “Prince.”

The book evolved from a series of interviews he granted to a researcher who asked him about his life, including his close exchanges with now Emperor Emeritus Akihito, at the encouragement of Akihito’s wife, now Empress Emerita Michiko.

Michiko called him to convey her gratitude when he sent a copy of the book to her. She said the book allowed her a glimpse into her husband’s life before they were married.