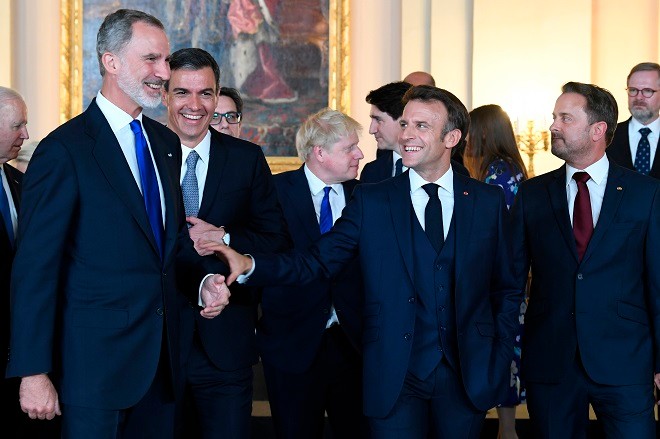 Referring to the shaky state of the world's largest intergovernmental military alliance, Marcon described Europe as standing on "the edge of a precipice."

Since losing its "enemy" 31 years ago with the collapse of the Soviet Union, NATO's reason for existence has remained in question.

Those decades of "drifting" have come to an abrupt end with Russia's invasion of Ukraine.

NATO on June 27 announced that it will increase its high-readiness forces more than seven-fold to more than 300,000.

Prime Minister Fumio Kishida is attending a NATO summit in Madrid on June 29 and will be the first Japanese leader to do so.

NATO is not a monolith. While its membership includes lesser nations contiguously exposed to Russia's threat, public opinion in the United States, NATO's principal member, is strongly opposed to any involvement in combat.

British geographer Halford John Mackinder (1861-1947) gave a historic speech in January 1904, when Russia was pushing its southward expansion policy and tensions with Japan were at their highest.

Alarmed by Russia's control over Eurasia's "heartland"--a region whose control, he believed, would be crucial for world domination--Mackinder drew a map of an "outer crescent" encircling it.

He proposed a strategy of containment by maritime nations, such as Britain and Japan at the tips of the crescent.

Regarded as one of the founders of geopolitics, it was as if Mackinder predicted Russia's military advancements to the south, east and west across centuries.

Kishida is probably envisioning boosting the crescent's solidarity to curb China, the new main player in the heartland.

Following the signing of the German-Soviet Nonaggression Pact immediately before the start of World War II, Japanese Prime Minister Kiichiro Hiranuma famously noted that the state of affairs in Europe was "complicated and mysterious," and his Cabinet resigned en masse.

With complex interests and anxieties swirling within NATO today, what will Kishida say at the summit, and what will he gain and lose?