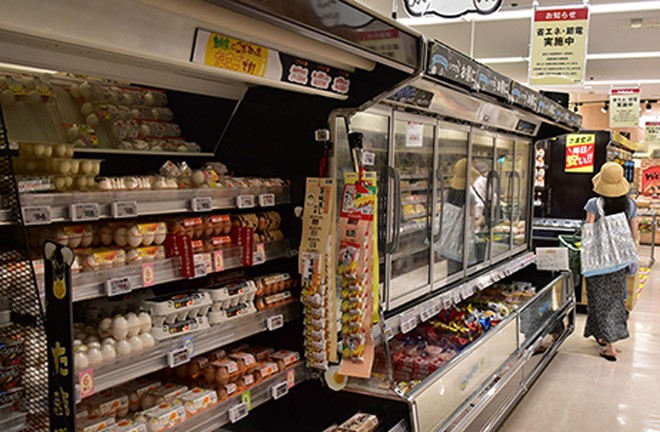 The lights on shelves are dimmed at a Summit supermarket in Tokyo’s Suginami Ward on June 27. (Hideaki Sato)

In a situation where an unexpected, massive blackout cannot be ruled out, saving energy is key to averting such an eventuality.

And to ensure this is done on a broad scale without sacrificing public health and social activities, the government and utilities need to issue easy-to-understand directives and develop policies that are effective and to the point.

The main causes of the current power supply problem are earthquake damage inflicted on thermal power generation in March and the recent extreme heat wave.

In areas serviced by TEPCO, the utility's estimated excess supply capacity for late afternoon hours continued to hover below 5 percent, which prompted the government to call for saving power with its June 27 caution.

The government's request is for "energy saving within reasonable limits," which obviously excludes any extreme practice that may be harmful to people's health.

It is vital that people prevent heatstroke by using air conditioners appropriately.

Some electronic appliances today allow energy-saving operation with simple adjustments. The government should provide such useful tips to the public, giving specific examples according to circumstances.

The government also needs to work on the kind of information that goes into its alerts and cautions.

At present, the public is never told the temperature range on which the estimated power supply situation is based, nor any additional supply volume that may later become available.

It is difficult for the public to correctly gauge the urgency of the alert or caution if the only information given is the excess supply capacity figure that varies from hour to hour.

If alerts and cautions are going to be issued frequently in the days ahead, people will become so used to them that the government may not be able to gain their cooperation when it is most needed.

The government definitely needs to reassess the details of the information on the power demands and supplies it publicizes, as well as to improve the speed and efficacy of the manner in which the information is given.

The government has announced that it will award points, equivalent to about 2,000 yen ($14.70), to households that participate in energy saving programs set up by utilities.

And commensurate with the results of energy saving achieved by the participating households, the government will also add to whatever points the utilities will award to the households.

If this system of rewarding users with discounts and refunds for using less power in times of shortages comes to be appreciated by many people, its significance will be great as an incentive for the public to save energy painlessly.

And we certainly don't object to the government assisting utilities. However, the government's current plan is not only half-baked, but it is also too difficult to support in many respects.

For one, it is a hairbrained policy to spend a massive amount of public money to reward households for just signing up for the utilities' energy saving programs that do not necessarily bring real results.

The policy is actually pointless unless the peak demand volume is factored into the equation. Moreover, by touting this policy as a "countermeasure against rising prices," the government is revealing its own confusion over the policy's purpose.

The government must clearly identify it as a "power supply policy" when discussing it.

The nation's power supply prospects are increasingly dire for the next winter. The growing number of idle or decommissioned old thermal power generation plants is bringing down the supply volume.

But the government is only reactive in addressing structural issues and reviewing the nation's power generation system to secure an appropriate excess supply capacity remains an urgent task.