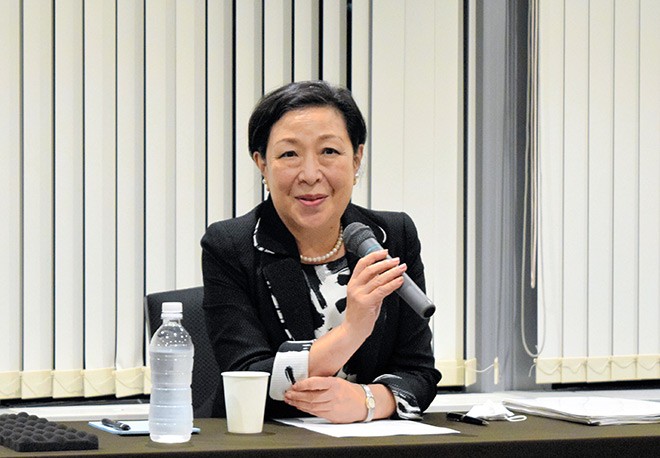 Mariko Watahiki speaks at a news conference in Tokyo on June 6 as an outside director of Toshiba Corp. (Kenji Izawa)

An outside director at Toshiba Corp. resigned on June 28 soon after shareholders overrode her objections and approved two executives of activist investment funds for the board of the company.

Mariko Watahiki, a former chief judge at the Nagoya High Court who was re-elected as a director at the same shareholders’ meeting, tendered her resignation soon thereafter.

The company’s board accepted her decision.

Her resignation will heighten the presence of activist investment funds on the company’s board and could accelerate Toshiba’s moves to go private, analysts said.

Watahiki was among 13 directors approved for the board at the shareholders meeting. Two of them are from overseas activist investment funds, both major shareholders of Toshiba.

Watahiki had opposed their nominations, saying they would lack impartiality.

On June 6, when asked about the nominations of the two executives, Watahiki told reporters, “I cannot help but say it appears the move (nominations) is biased toward certain shareholders.”

Toshiba is considering going private by enabling an investment fund or others to buy its shares.

Analysts believe that some activist shareholders want Toshiba to go private this way because the buyer will likely purchase their Toshiba shares at a premium.

Four directors chosen in 2019 on the recommendations of the activist investment funds were re-elected at the June 28 shareholders’ meeting.

With Watahiki’s resignation, six of the company’s 12 directors are from or affiliated with investment funds.

The company had recommended that its shareholders vote for all director nominees at the meeting.

During the meeting, a shareholder asked the company’s management if the selection of the two investment fund executives would create a conflict of interest.

Raymond Zage, an outside director at Toshiba who chairs its nomination committee, replied that agreements were signed by the company and the executives’ investment funds to prevent any conflicts of interest.

That explanation was not enough for Watahiki.

“I thought the agreements were insufficient in terms of thorough information management and preventing potential conflicts of interest,” she said about the selection of the two directors.

According to Toshiba, Watahiki said she resigned “to enable the board to be united and move forward.”

The company also said that 65.87 percent of the shareholders present voted for Watahiki’s re-election.

That may indicate potential instability in the company’s management and possible obstacles for plans to take Toshiba private.

Naoto Nakamura, a lawyer and expert on corporate governance, said investment funds would likely have greater influence on the board, but he praised Watahiki for expressing her objection.

“Watahiki, a legal expert, pointed out issues related to bringing in the two new directors, meaning that the investment funds cannot behave inappropriately on the board,” Nakamura said. “Her objection was a worthwhile action for Toshiba’s future management.”