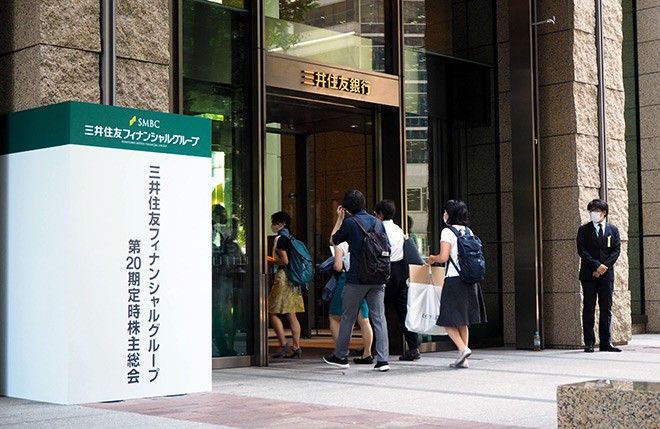 Corporate racketeering has declined significantly in Japan over the past few decades, but some companies this year found other reasons to apologize profusely to their shareholders.

According to the Tokyo Stock Exchange, about 600 companies, or 26 percent of those listed on the TSE whose business year ended in March, held their annual shareholders’ meetings on June 29. It was the lowest concentration rate since 1983, when such counting started.

Companies used to coordinate to hold their shareholders meetings on the same day to reduce the risk of “sokaiya” corporate racketeers from showing up.

Sokaiya would often buy stock that would enable them to attend the shareholders’ meetings, where they would disrupt proceedings with threats or accusations of wrongdoing directed at board members.

Companies that paid off the racketeers could expect smooth shareholders’ meetings.

According to the National Police Agency, about 1,700 people were working as corporate racketeers in 1983. By the end of 2021, the number had plummeted to around 180.

A revised law was enforced in 1982 that banned companies from giving favors to corporate racketeers.

In the 1990s, it became a common occurrence for listed companies to publicly apologize for their connections and payoffs to the racketeers.

Police started serious crackdowns against sokaiya that led to the decline in racketeering.

“I have very seriously taken (the scandal) to heart and apologize sincerely,” Jun Ota, president of the group, said at the beginning of the meeting.

A vice president and five other officials at SMBC Nikko Securities have been indicted on charges of manipulating the market to prop up share prices.

An investigation panel of the company found that it had used its own funds to place a large amount of buy orders to stabilize closing prices of certain stocks.

“The company’s management team lacked a crisis mentality, and measures within the company were insufficient,” the panel said.

Ota pledged to “thoroughly support the development of future countermeasures to prevent similar misdeeds based on the investigative findings by the (panel).”

He also said the entire group “will sincerely examine the problem within the system that manages and controls” SMBC Nikko Securities.

Mitsubishi Electric Corp., plagued with scandals over suspected illicit activities regarding quality control checks of its products, also held its annual meeting of stockholders on June 29.

The series of scandals started with apparent misconduct regarding an air-conditioning system for rail vehicles. The company knew about the problem in mid-June 2021, but it did not provide details at its general shareholders’ meeting in late June that year.

The company has been criticized as being passive about disclosing information to its stockholders.

So far, 148 suspected illegal activities have been found at 16 plants of the company.

Kei Uruma, president of the company, apologized at the beginning of the meeting on June 29.

“I have taken seriously the series of incidents and will work with the utmost effort to restore confidence in the company,” he said.