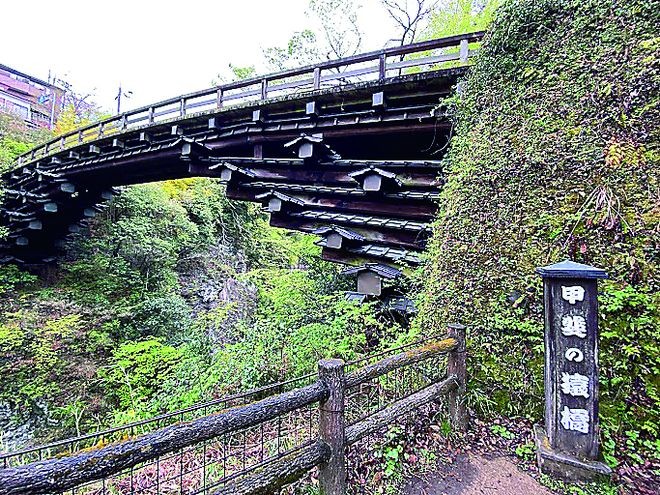 Known as the “monkey bridge,” Saruhashi bridge in Otsuki, Yamanashi Prefecture, is one of the “Three Strange Bridges of Japan.” It is 3.3 meters wide, 30.9 meters long and is perched about 31 meters above the beautiful gorge of the Katsuragawa river. (Photo by Lisa Vogt)

Once upon a time, a long, long time ago, there was a hit song in Japan titled “Ihojin,” or foreigner.

Around that time, there was a popular music quiz program called “Do-re-mi-fa-don” that decided to hold an “Ihojin Taikai,” where non-Japanese contestants would compete against each other.

I was one of the contestants, and in one section, I thought the answer was the Momotaro song and was nudged to sing it. I obliged, “Momotaro-san, Momotaro-san, okoshi ni tsuketa kibidango. ...”

Rakugo storyteller Sanshoutei Yumenosuke, an assistant of the quiz show, hammed it up, making the audience clap along with my singing. All was well until abruptly the wrong answer buzzer sounded, and I was made a fool of. I smile and cringe with embarrassment every time I think of this.

Last year, “Come Come Everybody,” a popular morning drama series, was broadcast on Japan Broadcasting Corp. (NHK). Okayama Prefecture has won the PR campaign to make people believe that is where the popular hero of Japanese folklore Momotaro’s origins lay.

In the program, there appeared the textile company Kijima-seni (kiji means Japanese pheasant), the heroine’s brother called Momotaro and a samurai called Momoyama Kennosuke (peach mountain and ken, which means dog). All of these creatures are related to the story of Momotaro.

Well, folks, I’m here to tell you that many places around Japan claim to be where the story originated, such as Kagawa, Aichi, Gifu, Nara and Yamanashi.

At JR Otsuki Station, I picked up their Momotaro legend flier and zig-zagged around the sites. I started at Oni-no-Tsue, a long narrow stone staff protruding from the ground at Ishido, in the middle of nowhere. The ogre who fought Momotaro at Mount Iwadono threw it and missed.

Nenokamijinja shrine lies on red soil, where the demon’s crotch was supposedly ripped open and blood poured out. I quickly left the creepy-feeling shrine and felt cleansed and peaceful seeing the stone jizo statue atop a lotus floating on what looks like a boat in the precincts of Entsuuji temple.

In the serene jizo’s hand was a peach-shaped object, a wish-granting jewel. (The old couple in the story was granted the child they had long wished for.) I walked across Monkey Bridge, a one-of-a-kind bridge over the Katsuragawa river, where the old lady washed clothes, and a few more sites.

Momotaro could indeed have originated here. Or, like my rendition of the song, it might have just been wishful thinking or simply a coincidence. We’ll never know, of course, but visiting the sites of famous legends is curiously satisfying.

This article by Lisa Vogt, a Washington-born and Tokyo-based photographer, originally appeared in the June 5 issue of Asahi Weekly. It is part of the series "Lisa’s Wanderings Around Japan," which depicts various places across the country through the perspective of the author, a professor at Meiji University.