Electricity usage caution in place until 8 p.m. as mercury soars 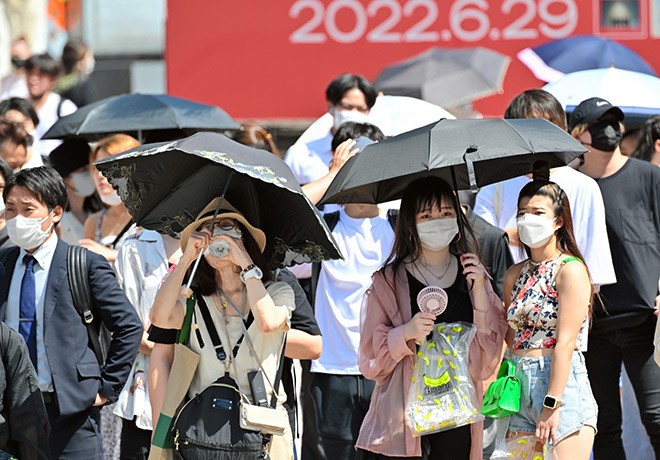 Pedestrians in the Shibuya district of Tokyo try to keep cool while waiting for the traffic light to change. (Takayuki Kakuno)

The government continued cautioning about the severe strain being placed on the electricity supply at Tokyo Electric Power Co. for the third straight day on June 29, as the situation could worsen as temperatures soar.

The economy ministry issues a caution when electricity usage is expected to exceed 95 percent of capacity the following day.

A review of electricity supply on the morning of June 29 based on the latest weather forecast had usage reaching more than 97 percent, the cutoff point for a stable supply of electricity, between 4:30 p.m. and 5 p.m.

While a warning would normally be issued at such a stage, economy ministry officials said TEPCO would borrow electric power from other utilities to help it avert a worst-case situation.

But the economy ministry was still asking those using TEPCO electricity to conserve energy between 3 p.m. and 8 p.m. to guard against any unexpected developments, such as coal-fired thermal plants malfunctioning.

The ministry on June 29 said the caution would remain in place the following day and called on those using TEPCO to conserve energy between 3 p.m. and 6 p.m. on June 30.

At the same time, government officials were also asking people to use their air conditioners at home to avoid heatstroke, given the scorching heat that continues to grip a large part of the nation.

According to the Japan Meteorological Agency, as of 3 p.m. on June 29, the recorded temperature exceeded 30 degrees at 610 of the 914 observation points and exceeded 35 degrees at 146 locations.

And Isesaki, Gunma Prefecture, recorded a temperature of 40 degrees, the second time this summer the city had the mercury soar above 40.

The agency also announced that the rainy season had likely ended in the southern Tohoku region, the first time that has happened in June. If the June 29 end of the rainy season is confirmed, the 14-day period would be the shortest since record-keeping began in 1951.

The northern Tohoku region is the only area where the rainy season is still considered in place.

Meanwhile, the Fire and Disaster Management Agency reported that between June 20 and 26, a total of 4,551 people had been taken by ambulance to treat heatstroke, a fourfold increase over the same period in 2021.