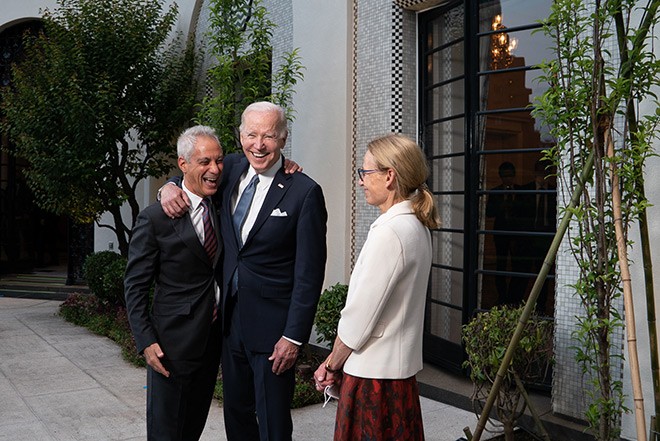 U.S. President Joe Biden, center, with Ambassador Rahm Emanuel and his wife, Amy, at the ambassador’s residence in Tokyo in May. (Provided by the U.S. Embassy)

Known as "Rambo" in political circles in Washington, D.C., U.S. Ambassador to Japan Rahm Emanuel is taking on a less fearsome persona in his first six months on the job.

Instead, Japanese social media users have been asking if Emanuel could be called a “tetchan,” evidenced by his tweets.

The term refers to train aficionados, in which there are various subcategories depending on whether the train buffs like taking photos of trains (“tori-tetsu”) or simply enjoy riding them (“nori-tetsu”).

Emanuel generated social media chatter because he took the Keikyu Corp. train from Shinagawa to Yokosuka on Feb. 17 with his wife, Amy, to meet with officers of U.S. Naval Forces Japan as well as show his support for the U.S. Navy's Seventh Fleet.

Emanuel tweeted about the experience and wrote, “Today’s commute to Yokosuka was my first train ride as Ambassador. Japan’s world-class rail system is worthy of a world-class country. It did not disappoint.”

Social media users noted that taking the Keikyu train was a sign of a possible tetchan because East Japan Railway Co.’s Yokosuka Line also connects Shinagawa with Yokosuka and has a first-class Green car service.

As U.S. ambassador, Emanuel not only has special police protection, but also embassy limousines at his beck and call.

But he will often use public transport or even walk to destinations that are close to the U.S. Embassy in Tokyo.

He is clearly a huge fan of the on-time and clean Tokyo subway system. He recently stood on the Higashi-Ginza Station platform for the Hibiya Line and described as “perfect” the video display that gave the reason for even the slightest delay in the arrival of a train.

He took the Hibiya Line to Toranomon-hills Station, which opened two years ago. He held onto a strap, but when seats right in front of him opened up after two stops, he turned to two women standing near the door and suggested they take the seats.

On that day, Emanuel again tweeted about his experience and wrote, “Hello, Higashi-Ginza Station! First time taking the Hibiya Line, a Tokyo classic. A new station, a new train line, same Japanese perfection. A perfect 10 for 10 on my train rides in Japan for on-time arrival.”

Although Emanuel presented his credentials at the Imperial Palace in March, he actually arrived in Japan on Jan. 23 and after the quarantine period ended, he walked to the Foreign Ministry in Tokyo’s Kasumigaseki district from the embassy.

On a subsequent visit to Yokohama, Emanuel took the JR Tokaido Line and he has also rode the Shinkansen bullet trains for visits to Nagoya, Kyoto and Osaka.

He tweeted, “I’ve ridden trains across the United States and Europe, and you haven’t ridden a train until you’re on the shinkansen. High-speed rail is another promising area for U.S.-Japan economic collaboration.”

Moreover, while he was in the Kansai region, Emanuel took the subway as well as a train operated by Hankyu Corp.

When he tweeted, “Love the really plush seats! Hankyu. Hankyu very much.” the company president presented him with a train seat cover.

Emanuel had a different image when he held powerful posts in Washington, D.C., and his nickname was “Rambo” because he tended to step on the toes of political opponents.

Between 1993 and 1998, he was senior adviser to then U.S. President Bill Clinton on policy and politics. One character in the award-winning U.S. TV drama “The West Wing” from about two decades ago is believed modeled after Emanuel.

From 2002, he served three terms as a congressman from Illinois, before becoming chief of staff to President Barack Obama in 2009.

In 2011, Emanuel was elected as Chicago mayor and re-elected four years later.

GETTING OUT TO MEET JAPANESE

In Japan, Emanuel has taken on a completely different persona as ambassador.

Not only does he often use public transportation, but when he visits various cities in Japan, he will inevitably go to wholesale markets or shopping districts because of his philosophy that to experience Japan means to meet the Japanese where they work, commute and shop.

According to U.S. Embassy officials, Emanuel also prefers to dine where the common people eat, rather than at a three-star Michelin restaurant. He will often choose the fixed meal lunch sets that ordinary salarymen regularly eat.

He has tweeted about his taking public transportation,

“Doing my part for the environment by walking to meet Environment Minister Yamaguchi Tsuyoshi. Each one of us can and must make a difference to protect the environment and stop the climate crisis.”

HAS 'COMPLETE TRUST' OF BIDEN

As ambassador, Emanuel also meets with those high up in the Japanese political, administrative and business worlds to exchange views and to gather information.

He is helped in those efforts by his close ties to U.S. President Joe Biden. That was clearly demonstrated when Biden came to Japan in May. When he stepped off Air Force One at U.S. Yokota Air Base in western Tokyo, Emanuel was waiting to greet him with a hug.

In a video he posted soon after coming to Japan as ambassador, Emanuel said, “I’ve known the President for a long time. I’m proud to call him a dear friend.”

During an online meeting between Biden and Prime Minister Fumio Kishida at which Emanuel also sat in, the president told Kishida that his ambassador had his “complete trust.”

Government sources expressed surprise at the close relationship between the two.

One said, “Among ambassadors, Emanuel probably has among the strongest ties to a sitting president. In addition, when we think about his experience and achievements in the U.S. political world, he is someone Japan can truly depend on. At the same time, he may also become a very tough negotiating counterpart.”