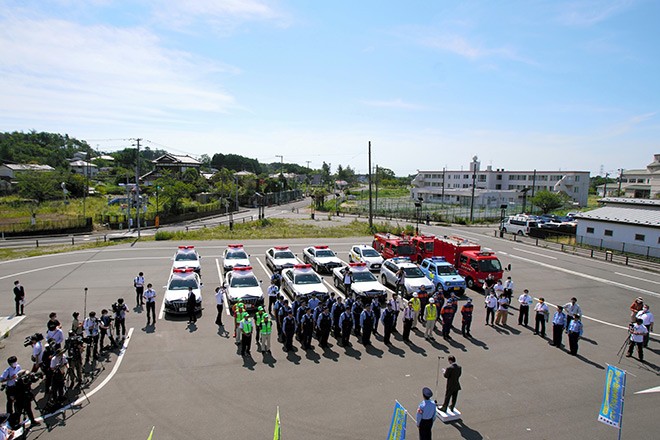 A ceremony for patrols is held near JR Ono Station in Okuma, Fukushima Prefecture, on June 30 after the evacuation order was lifted. (Shigetaka Kodama)

OKUMA, Fukushima Prefecture--An evacuation order was lifted on June 30 for part of the "difficult-to-return zone" of a town here that is home to the crippled Fukushima No. 1 nuclear power plant, but few residents are expected to return.

It is the first time an evacuation order has been lifted in an area within such a zone in a town that co-hosts the plant.

Residents were allowed to return to the area for the first time in 11 years, since the nuclear accident at the plant in March 2011.

As residents had been barred from entering the area for a long time, only 0.8 percent of them had applied for the government’s program to temporarily return and stay there.

“It will take more time to rebuild what was once a lively town, but this is a big milestone toward reconstruction,” said Okuma Mayor Jun Yoshida.

The evacuation order was lifted in the center of the town, where JR Ono Station and the former town government building sit.

The disaster occurred when the plant lost power and thus could not cool its reactors after the Great East Japan Earthquake struck and a tsunami swamped the plant.

The central government designated the area as a difficult-to-return zone since radiation doses there exceeded 2.5 times the amount needed to issue an evacuation order immediately following the triple meltdown at the plant.

The government also designated the area as a special zone for reconstruction and revitalization about five years ago, and work began to decontaminate the area based on the premise that residents could live there again.

As part of efforts to rebuild the areas around the nuclear power plant, the government allowed residents to temporarily return home in December to prepare for when they could do so permanently.

This is the second time the evacuation order has been lifted in areas designated as a special zone for reconstruction and revitalization, following part of Katsurao, Fukushima Prefecture, on June 12.