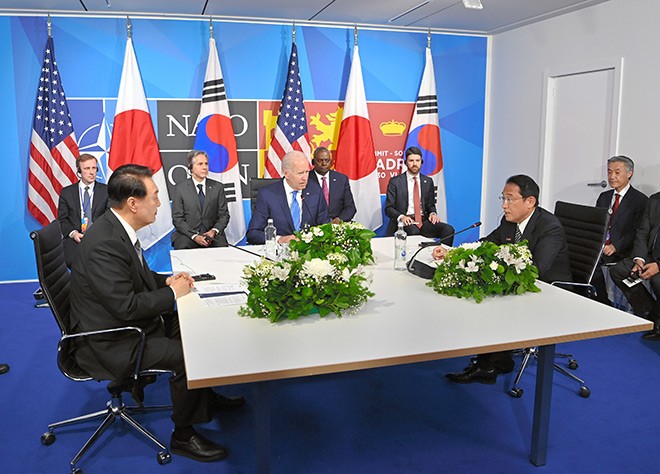 MADRID--The leaders of Japan, the United States and South Korea agreed to work closely together in response to the threat posed by North Korea’s ballistic missile launches.

It marked the first time since September 2017 that the leaders of the three nations met face to face.

According to the South Korean presidential office, the three leaders confirmed that the series of missile launches by Pyongyang constitutes a serious threat to the East Asia region and the international community.

They agreed to work closely on trilateral security cooperation and strengthening deterrence, including through the U.S. nuclear umbrella.

The trilateral session, as well as the first in-person meeting between Kishida and Yoon the previous day, were orchestrated by U.S. officials who have urged their two allies to put their differences aside to deal with increasingly important security issues.

That not only includes Pyongyang’s actions but also Russia’s invasion of Ukraine and various moves being made by China.

While the encounter between Kishida and Yoon lasted only a few minutes, officials were already expressing the hope that it would serve as a catalyst for improving bilateral ties, which have sunk to the lowest level since the end of World War II.

U.S. officials considered the election of the conservative Yoon as an opportunity to push for a thaw in Japan-South Korea relations.

And it is a tried-and-true approach.

The administration of U.S. President Barack Obama took a similar approach in 2014 and it led to a trilateral meeting that also included Prime Minister Shinzo Abe and South Korean President Park Geun-hye. That meeting was also held on the sidelines of an international conference in the Netherlands.

Abe and Park met directly the following year, the first bilateral summit meeting in about three and a half years.

(This article was compiled from reports by Kazuo Ikejiri and Takuya Suzuki in Madrid, Yuichi Nobira in Tokyo and Ryo Kiyomiya in Washington.)