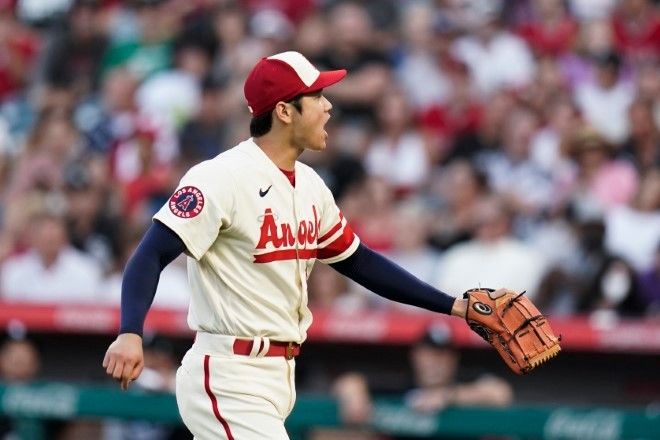 ANAHEIM, Calif.--Shohei Ohtani extended his scoreless streak to 21 2/3 innings while pitching five-hit ball into the sixth with 11 strikeouts in the Los Angeles Angels’ 4-1 victory over the Chicago White Sox on Wednesday night.

Ohtani went 0 for 3 with a walk at the plate, but Luis Rengifo hit a two-run homer and Mike Trout had an early RBI double as the Angels finished their disappointing nine-game homestand on a positive note because of their two-way superstar’s work on the mound.

Ohtani (7-4) yielded five singles and a walk while winning his fourth consecutive start. The AL MVP hasn’t allowed a run since the fifth inning of his brilliant seven-inning outing in Boston on June 9, giving him an 0.34 ERA with 36 strikeouts over 26 2/3 innings in his last four starts.

Ohtani’s streak included scoreless efforts in victories over Seattle and Kansas City before this tough challenge against the White Sox, who pounded out 17 hits and 11 runs one night earlier. After he struck out a career-high 13 Royals last week, Ohtani reached double-digit strikeouts for the fifth time this season against Chicago.

Michael Kopech (2-5) yielded five hits and two walks over 5 1/3 innings for the White Sox, who have lost six of eight.

Chicago avoided its third shutout loss of the season when Luis Robert reached on shortstop Andrew Velazquez’s throwing error and eventually scored on Ryan Tepera’s wild pitch in the eighth.

Tepera escaped that jam, and Raisel Iglesias pitched the ninth for his 15th save.

Ohtani gave up two singles while racking up three strikeouts in the first inning, and the Angels scored moments later when Taylor Ward delivered a leadoff single and came around on Trout’s double. Trout then scored when Kopech made an error at first base while Chicago tried to turn a tricky 3-6-1 double play.

Ohtani escaped a bases-loaded jam in the fourth after allowing two more singles and a walk, striking out Josh Harrison with a slider. Ohtani also reached back for two fastballs over 100 mph during the inning.

Angels acting manager Ray Montgomery pulled Ohtani with José Abreu on first after Ohtani struck out Gavin Sheets with his 108th pitch, matching his season high. Abreu got to third when reliever José Quijada gave up a long single to A.J. Pollock, but Quijada escaped the jam.

Rengifo doubled Los Angeles’ lead and chased Kopech with his two-run shot into the ficus trees beyond center field later in the sixth.