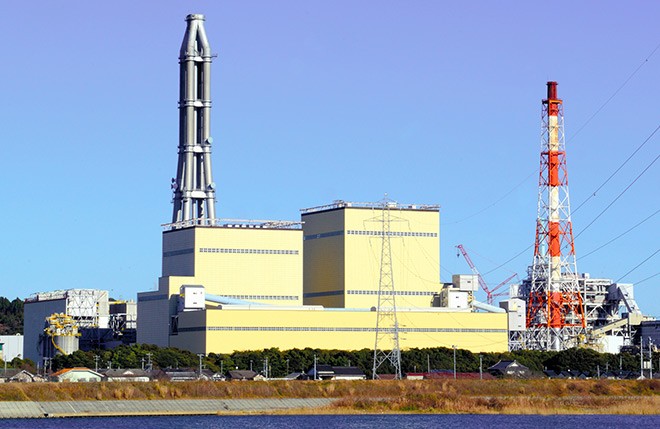 The No. 9 unit is in the left building of the Nakoso Thermal Power Station in Iwaki, Fukushima Prefecture. (Provided by Joban Joint Power Co.)

A malfunction at a thermal power plant in Fukushima Prefecture forced a temporary suspension of operations and exacerbated the risk of a blackout in the capital as it swelters under a grueling heat wave.

The potential crisis was averted after another thermal power unit was restarted in the Tokyo metropolitan area.

But one of the two boiler fans at the unit failed, forcing the shutdown of operations at 3 a.m. on June 30, according to Joban Joint Power Co., a TEPCO affiliate.

The other fan was working properly, and operations resumed at 12:30 p.m. with the working fan but at a reduced output of 250 megawatts, the affiliate said.

The central government had issued a caution to areas served by TEPCO about a possible severe strain on the power grid as air conditioners are cranked up to provide respite from the scorching weather.

The economy ministry on the morning of June 30 said the electricity reserve rate, or the percentage of unused power, would worsen because of the problems at the No. 9 unit.

The rate was estimated at 3.2 percent on the evening of June 29.

But it was expected to slip to 3 percent, the minimum level required to provide a stable supply of electricity, from 4:30 p.m. to 5 p.m. on June 30, the ministry said earlier in the day.

To prevent a possible electricity shortage in summer, JERA Co., a company jointly funded by TEPCO and Chubu Electric Power Co., on June 30 resumed operations of the No. 5 unit at its Anegasaki Thermal Power Station in Chiba Prefecture.

Operations of the unit, which has a capacity of 600 megawatts, had long been suspended because of its advanced age.

With the unit back online, the electricity reserve rate for July 1 is now expected to exceed 5 percent, the government said.

The government lifted the caution at 6 p.m. on June 30 but urged the public to continue efforts to conserve energy.

JERA is also prepared to restart a unit at its Chita Thermal Power Station in Chita, Aichi Prefecture.