Kishida: Security of Indo-Pacific and Europe are ‘inseparable’ 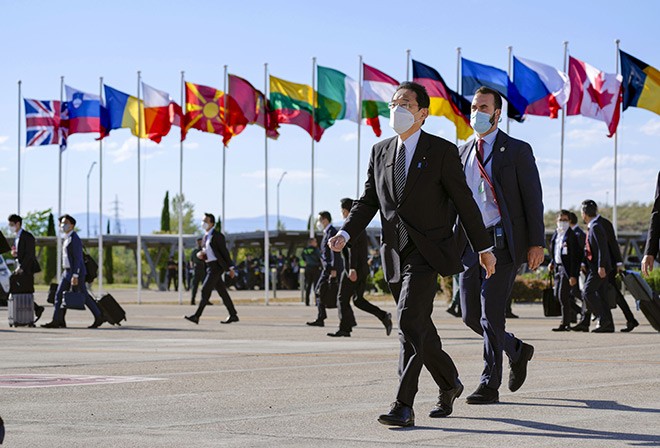 Prime Minister Fumio Kishida heads for the plane flying him back to Japan from Madrid on June 29. (Pool)

MADRID--Prime Minister Fumio Kishida reported that important progress was made in security cooperation at the NATO summit, the first ever attended by a Japanese prime minister.

“We were able to share in the understanding that national security in Europe and the Indo-Pacific region is inseparable and that changing the status quo through force is unacceptable in any region of the world,” Kishida told reporters ahead of his flight back to Japan.

He was also asked about the first meeting in about five years between the leaders of Japan, the United States and South Korea.

“We agreed to work closely together from the standpoints of strengthening deterrence, including through security cooperation between the three nations, and working within the U.N. Security Council as well as other diplomatic efforts--all in working toward the complete denuclearization of North Korea,” Kishida said.

The prime minister was also asked about various public opinion polls showing his ruling Liberal Democratic Party is expected to do well in the July 10 Upper House election.

“The actual results are everything, so I will not be influenced by the results of opinion surveys,” he told reporters.

Kishida again said his goal for his party is for the ruling coalition to maintain its majority in the Upper House.

He also brushed aside questions about the possibility of reshuffling his Cabinet or LDP executives after the election, emphasizing that his mind was set only on the Upper House campaign.

The special government plane carrying Kishida and his entourage was expected to arrive in Japan on the afternoon of June 30.