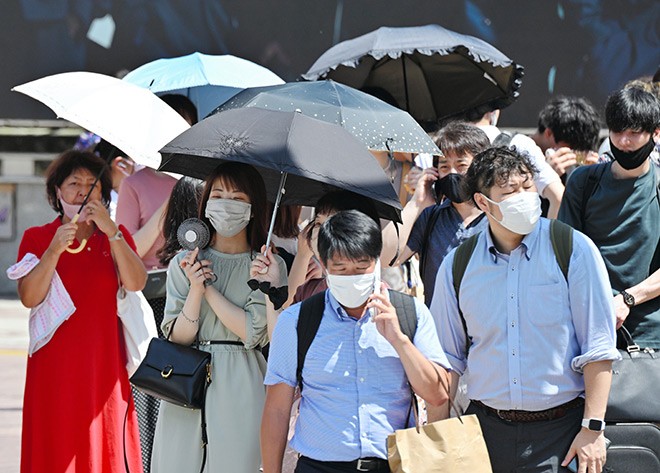 Pedestrians in front of JR Shibuya Station swelter in the extreme heat on June 29. (Takayuki Kakuno)

Pressure patterns typical for July and August created a heat wave across the country on June 29 and record-high temperatures for the month in 135 locations, the Japan Meteorological Agency said.

Of the 914 observation points nationwide, 613 recorded daytime highs of 30 degrees or above as of 7 p.m., according to the JMA. The mercury soared to 35 degrees or higher at 151 locations.

Record-high temperatures for June were recorded in 35 of Japan’s 47 prefectures.

Isesaki, Gunma Prefecture, baked under 40-degree heat on June 29, but that was actually a bit cooler than the 40.2-degree temperature that scorched the city on June 25, the highest June temperature on record in Japan.

Nagoya recorded its highest-ever temperature for June at 37.5 degrees on June 29, while Kyoto marked its second straight day of hitting 35 degrees or higher.

Temperatures reached 34.5 degrees in Fukuoka’s Chuo Ward on June 29, making it the hottest day this year.

The scorching heat again gripped the nation on June 30, with temperatures nearing 40 degrees in the Kanto-Koshin and Tokai regions.

The mercury rose to 36.4 degrees in central Tokyo at 12:43 p.m., marking the sixth straight day of 35 degrees or higher weather in the capital. The longest hot spell was eight consecutive days starting from July 31, 2015.

Daytime highs reached 35 degrees or above at 170 observation points as of 3 p.m., according to the agency.

Inside a high-pressure system, the air compresses as it descends, which raises temperatures.

Atmospheric conditions are stable inside the descending air, preventing clouds from forming.

With few clouds to block the sun’s rays, temperatures near the ground tend to rise even further, according to the JMA.

Such pressure patterns are usually seen in July and August after the end of the rainy season.

A similar layering of two high-pressure systems was observed in July 2018, when a Japanese record of 41.1 degrees hit Kumagaya, Saitama Prefecture, and in August 2020, when Hamamatsu, Shizuoka Prefecture, tied the record.

This year, the agency said the rainy season had ended before July across the nation, except for the northern Tohoku region and Hokkaido, which has no rainy season.

The JMA expects clouds will prevail nationwide from the beginning of next week, which will bring temperatures down to around the average for this time of year.

But the agency’s forecast shows temperatures will be higher than average in the days ahead.

Weathernews Inc., which provides daily weather updates and other meteorological information, said on June 22 that Japan will likely experience sweltering heat this summer.

The Chiba-based company expects the heat will peak in late July and late August, when two high-pressure systems will likely develop further.

“We expect daytime highs (around that time) to reach current levels,” said an official of Weathernews’ forecast center.

The official added that night-time temperatures will likely top 25 degrees on many days during those periods since overnight lows are expected to be higher than those recorded recently.