Fujitsu creating app to allow ‘everyone to escape’ tsunami 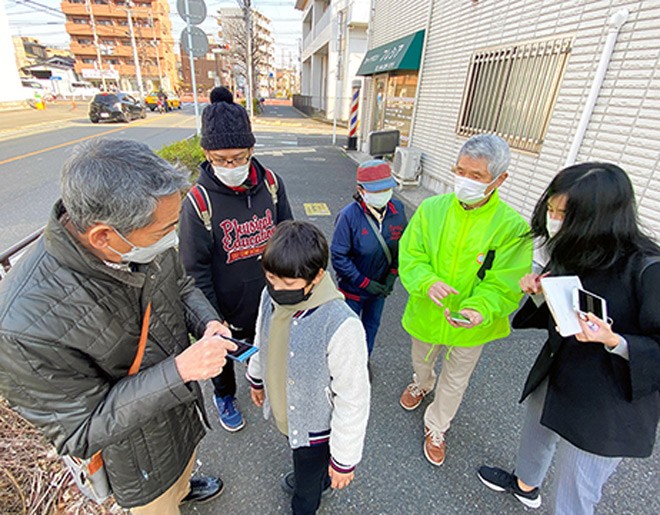 Participants of an evacuation drill head to a shelter as they look at a map on their smartphones for tsunami information in Kawasaki on March 12. (Hideaki Ishibashi)

KAWASAKI—Fujitsu Ltd. is using the Fugaku supercomputer and artificial intelligence (AI) technology to develop a smartphone app that can provide real-time countdowns on when quake-triggered tsunami will flood specific areas.

In mid-March, the Tokyo-based IT giant tested its flood prediction app during a tsunami-evacuation drill in a coastal area of Kawasaki Ward in Kawasaki.

Members of a neighborhood association and other residents who had installed the app joined the drill. They often peered at their smartphones as they headed toward an evacuation site at a junior high school.

The app on their screens showed different colors for the estimated arrival times of the waves and the height of the tsunami.

The locations of the smartphone user and other participants were displayed on the map. It also showed whether people had been left behind in the danger zones.

“It feels realistic because (the map) shows, for example, how many minutes are left until the tsunami reaches the blue areas,” said Masayuki Suyama, 75, head of the Fujisaki neighborhood association.

Fujitsu worked with the Kawasaki city government for the app test.

The company has been collaborating with Tohoku University and the University of Tokyo on tsunami flood prediction technology using the Fugaku supercomputer and an AI model.

Project members used Fugaku, one of the world’s fastest supercomputers in terms of calculation speed, to run simulations of several tens of thousands of scenarios. “Training data” was created to predict flooded areas based on offshore waveforms. The AI model then learned the data.

After actual earthquakes, tsunami waveform data gathered by the Ministry of Land, Infrastructure, Transport and Tourism and related organizations is entered into computers at municipal governments and other institutions.

The trained AI model can generate flood predictions on those computer systems and send the forecast information to smartphones in each area in a matter of seconds.

During the flood-simulation stage, the AI model also incorporates data concerning terrain, buildings and road conditions based on information provided by the Geospatial Information Authority of Japan and other entities.

After the Great East Japan Earthquake struck on March 11, 2011, people in coastal areas of the Tohoku region had to rely on announcements by the Japan Meteorological Agency (JMA) for estimated tsunami heights and arrival times.

But the actual arrival times differed largely from location to location.

Many people died after mistakenly thinking that the tsunami risk ended as the predicted arrival time had passed or that the waves wouldn’t reach their location.

The tsunami observation network in Japan has since been reinforced, and the capabilities of supercomputers and AI have significantly improved.

“We aim to build a system that will allow everyone to escape (tsunami),” said Yusuke Oishi, 43, a Fujitsu researcher on the development team.

However, a number of challenges must be overcome to put the app into practical use.

According to the JMA, operators are prohibited from spreading flood predictions to an unspecified number of people to avoid confusion caused by data that may conflict with warnings issued by the agency.

Unexpected events and measurement errors are always a risk during natural disasters. App users could wrongly assume they are out of harm’s way based on locations shown on an app’s map.

For those reasons, only those briefed in advance about the uncertainty of predictions will be provided with detailed flooding information via Fujitsu’s app.

They include neighborhood association members in charge of disaster-preparedness and volunteer firefighters, who will use the app to call for evacuations.

“In light of the results of the trial run, we want to continue considering how to provide information and to whom,” a Fujitsu representative said.

The Wakayama and Mie prefectural governments have jointly developed a tsunami flooding forecast system using an observation network set up on the seafloor by the Japan Agency for Marine-Earth Science and Technology (JAMSTEC).

The two prefectures have gained permission for forecasting services. But their clients are limited to municipal governments along the coast and other officials.

Individual users have been excluded.