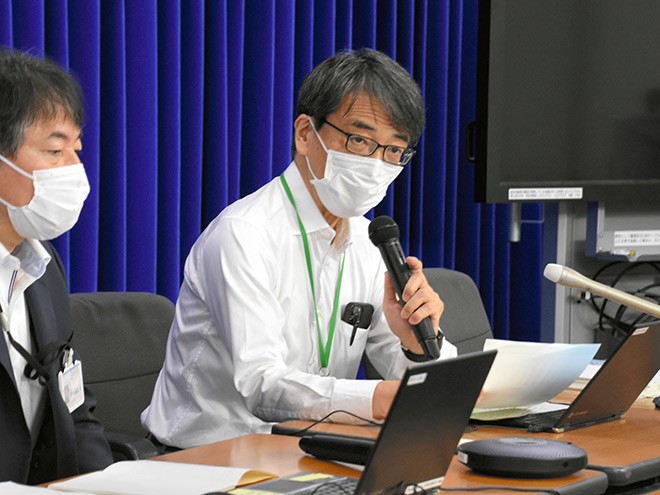 Takaji Wakita, head of the National Institute of Infectious Diseases, speaks at a news conference on June 30. (Kai Ichino)

Novel coronavirus infections have continued to increase around Japan since health protocols were eased, a resurgence that prompted the Tokyo metropolitan government to raise its alert level for the spread of the virus.

A panel of experts advising the health ministry said at a meeting on June 30 that the BA.5 subvariant of the Omicron variant has replaced existing strains and is “possibly accelerating the infections.”

“There is a possibility that the BA.5 will become mainstream in Japan,” Takaji Wakita, head of the National Institute of Infectious Diseases (NIID) who chairs the panel, said at a news conference.

Over the week until June 29, the daily average of newly infected people in Japan was 1.17 times the figure for the previous week.

Tokyo led the nation with 3,621 new COVID-19 cases on June 30, 1.5 times the tally for the previous Thursday. It was also the 13th consecutive week-on-week rise in the capital.

The metropolitan government raised its alert on its 4-scale system to the second highest level, indicating “infections are spreading.”

New COVID-19 cases over the week until June 29 increased in 29 prefectures, particularly in urban areas and in the Kyushu region.

The ministry’s advisory panel said the major causes of the resurgence include “immune compromise,” reflecting the time that has passed since people received their last vaccine shots.

Another factor is that social activities have become more active, experts said.

The government has eased its advisories on mask wearing and relaxed anti-virus measures at ports of entry. Business hours and services in entertainment districts are also returning to normal.

Attendees of a Tokyo metropolitan government meeting about COVID-19 trends on June 30 said the daily average of newly infected people in the capital in the week to June 29 was 2,337, or 138 percent of the average for the previous week.

It was the second consecutive increase.

Norio Ohmagari of the National Center for Global Health and Medicine said at a news conference held after the meeting that the daily average in Tokyo “could be 3,000 next week and 5,000 in the following week.”