EDITORIAL: Japan should work with NATO toward regional peace, stability 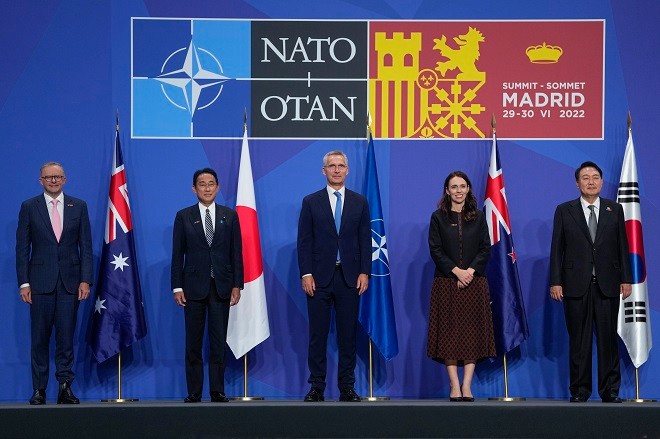 In western parts of the vast Eurasian continent, Russia continues its aggression against Ukraine.

Meanwhile in eastern areas of the continent, China, armed with massive economic and military power, is challenging the existing world order by pursuing aggressive naval expansion and intimidating Taiwan.

Amid this alarming security situation, it makes good sense for Japan to seek a stronger security cooperation with European countries in addition to enhancing its security alliance with the United States.

But emphasizing a confrontational stance toward China could end up simply heightening tensions. Tokyo should also step up its efforts to pursue effective dialogue with Beijing.

Prime Minister Fumio Kishida attended the NATO summit held recently in Madrid, becoming the first Japanese government head to take part in a meeting of the leaders of member countries of the North Atlantic Treaty Organization.

Kishida was invited to the gathering as the leader of one of NATO’s Asia-Pacific partners, which also include South Korea, Australia and New Zealand.

Kishida expressed a strong sense of crisis about the security landscape, saying, “Ukraine today may be East Asia tomorrow.”

Maintaining that “national security in Europe and the Indo-Pacific region is inseparable,” Kishida said his government will expedite its work to update Japan’s Individual Partnership and Cooperation Program with NATO, signed eight years ago.

As specific goals, he cited cooperation for cyber and maritime security and increased opportunities for Japan and NATO to take part in each other's military drills as an observer.

Clearly, the government is trying to sharply upgrade the bilateral relationship with NATO it has been trying to strengthen over the past 10 years through such operations as joint exercises to deal with piracy.

This is in line with Japan’s broader strategy for getting Europe solidly committed to East Asia as a way to counter China’s expansion.

The latest summit was also a major turning point for NATO. The alliance decided to accept Finland and Sweden, which have long maintained military neutrality, as its two new members.

NATO’s new “Strategic Concept” adopted at the Madrid summit stripped Russia of its position as a partner and labeled the country “the most significant and direct threat to Allies’ security and to peace and stability in the Euro-Atlantic area.”

Referring to China for the first time, the document warned the country’s “ambitions and coercive policies challenge our interests, security and values.” It also sounded the alarm about the “deepening strategic partnership” between Beijing and Moscow.

Japan should welcome the shift in Europe’s strategic posturing toward China. After many years of focusing on the economic benefits from its relations with China, it is encouraging to see Europe beginning to pay renewed attention to Japan as its key partner in Asia.

It should be noted, however, that NATO is a military alliance whose principal mission is securing collective defense among its member countries. In working on specific plans for cooperation with NATO, Japan needs to make sure there will be no deviation from its security policy principles.

Cooperation between Japan and Europe is underpinned by shared universal values. But the Asia-Pacific is a region of countries with hugely diverse historical, racial and religious backgrounds.

It is impossible to persuade these diverse countries into rallying around such values as “freedom” and “democracy.”

Japan’s role should be to contribute to regional peace and stability by seeking wider cooperation among countries in the region under the banner of “the rule of law” based on respect for sovereignty, which means no country should be subjected to unfair intervention by a major power.