VOX POPULI: No one can paint out the craving for freedom felt in Hong Kong 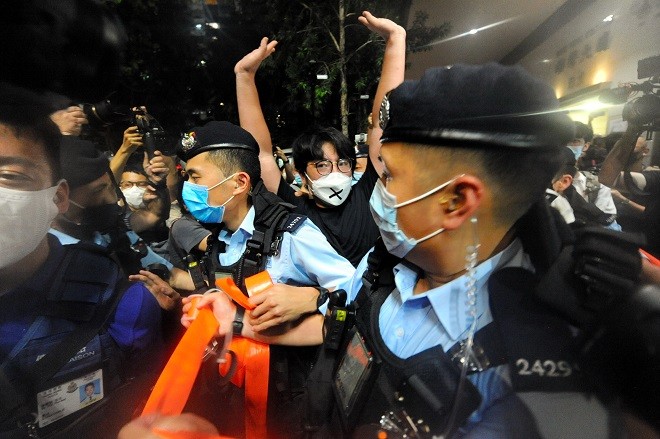 A man stands in protest wearing a mask with an “x” sign at the entrance of Victoria Park in Hong Kong, where an annual vigil has been held for victims of the 1989 Tiananmen massacre in Beijing, on June 4. He was later taken away by police. (Atsushi Okudera)

I have watched two films portraying events in Hong Kong.

Both “Revolution of Our Times” (2021) and “Blue Island” (2022) are scheduled to be released later this summer in Japan. They both provide close-up views of how the 2019 protests for more freedom were repressed.

Neither cinematic work has been screened in theaters in Hong Kong.

“Revolution of our times” was one of the slogans young participants of the protests chanted.

Officials of an overseas film festival kept secret until the last moment that they were going to screen "Revolution of Our Times" for fear its title could provoke supervisory authorities.

I was profoundly shocked to learn the protests had been suppressed with such unreserved high-handedness in busy commercial districts of Hong Kong, which are quite familiar to me as I was once stationed in the autonomous city as a reporter.

A scene showing tear gas bombs being shot onto the campus of a university I had attended every week to take lessons in Chinese was a sheer nightmare for me to watch.

Things are no longer what they were during the Umbrella Movement of 2014, when young people occupied major roads for more than two months to call for more democratic elections. Then, police only surrounded the protesters from a distance.

A yellow umbrella was tied to the hand of a life-size cutout of Chinese President Xi Jinping, and protesters seemed amused as they photographed it.

That was another occasion when the slogan “Revolution of our times” flooded the streets.

One scene in “Blue Island” presents people who were prosecuted, along with the charges brought against them, such as colluding to subvert the state, rioting against public order and holding an illegal meeting.

Many people have been deprived of their freedom after the Hong Kong National Security Law took effect in 2020. Resentment showed through the looks of the young “defendants” shown on the screen.

Hong Kong was returned from Britain to China 25 years ago today.

The skies of Hong Kong are now bicolored, covered in the red of the Communist Party of China and the blue of the city’s pro-Beijing camp.

Yellow, the symbol of resistance, is no longer anywhere to be seen.

Nobody, however, could ever paint out Hong Kongers’ craving for freedom.