Survey: Prices of over 15,000 food products headed up by year-end 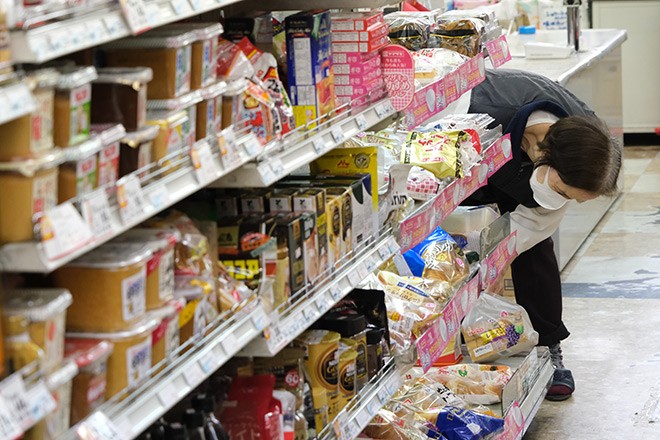 A customer looks at the bread offerings, which have become more expensive due to soaring wheat prices, in Tokyo’s Taito Ward on April 28. (Taku Hosokawa)

More than 15,000 food products will be subject to price hikes by the end of the year, research company Teikoku Databank Ltd. reported on June 30.

“It is probably unprecedented to see price hikes across such a wide range of food products,” said an official at the research company.

Prices of the 15,257 items are expected to increase about 13 percent on average.

The wave of price hikes is not expected to ebb as the cost of imported raw materials continues to soar due to the weak yen.

The company said the number of food items whose prices will be raised is likely to exceed 20,000 by the end of this year.

Teikoku Databank conducted a survey of the 105 leading food manufacturers in Japan. It asked how many food products they raised the prices on as of the end of June and how many they plan to increase during the rest of the year.

More than 4,000 products were added from the company's previous survey in early June.

The hikes are expected to peak in October when the prices of more than 3,000 items will be increased.

The prices of many products will be raised twice or more this year. These include bread, ham and canned foods.

Processed foods account for about 40 percent (6,712) of the food products with prices that have been, or will be, increased. That is an increase of more than 2,000 items from the previous survey in early June.

Processed foods are the largest group to see a price hike because the prices of processed seafood products and frozen foods continue to rise.

Beverages including alcohol such as beer account for about 20 percent (3,585 items). The cost of their containers, such as cans and PET bottles, are also increasing.

Condiments such as mayonnaise and dressing account for 17 percent (2,627 items).

Price hikes for food products are accelerating as resource prices are surging and the yen is weakening. Many firms are reviewing their prices on the assumption that the yen will remain weaker than 130 to the dollar.

Some firms have not fully factored in the current level of the weakening yen and may decide to raise prices in the future.