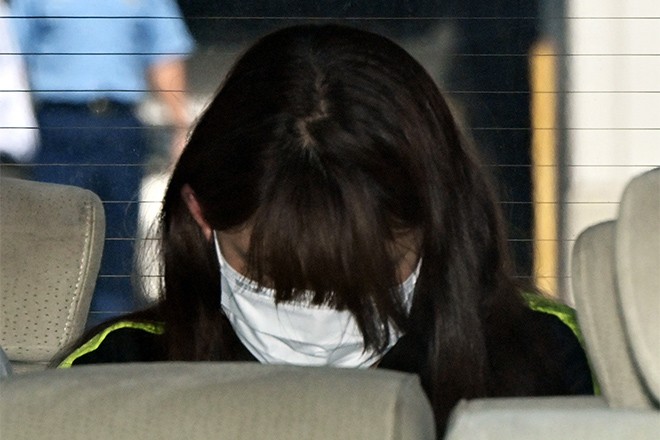 Mayumi Ono in Sakai, Osaka Prefecture, on July 1, a day after she was arrested for leaving her 2-year-old granddaughter unattended (Satoru Ogawa)

A 2-year-old girl left alone all day in her playpen in an apartment in Osaka Prefecture amid a nationwide heat wave died from heatstroke while her family went to a theme park.

Osaka prefectural police arrested Mayumi Ono, 46, along with her common-law husband, Takanori Momoda, 50, on June 30. They are accused of neglecting her granddaughter Yuha Ono for 11 hours in their apartment in Tondabayashi, Osaka Prefecture.

The girl died on June 29, and police announced on the evening of June 30 that the cause of death was heatstroke.

According to police, Ono, who is unemployed, and Momoda, who is self-employed, left their home at around 5 a.m. They left Yuha in a playpen in the living room of their home, which is on the third floor of an apartment housing complex.

Yuha was left unattended until around 4 p.m. that day. The two admitted to the charges, according to police.

Ono and Momoda adopted Yuha from her parents and were raising her, police said.

According to sources, the two told police, “We went to play at Universal Studios Japan,” a popular amusement park in the city of Osaka.

“We have gone out and left (Yuha) unattended on several occasions,” Momoda told investigators. “We have been under a lot of stress from parenting.”

Based on the autopsy, Yuha appeared to have died around noon on June 29, according to police.

More than half a day had passed since she had her last meal, police said.

When the 15-year-old returned home a little after 4 p.m., he found Yuha lying in her playpen and discovered that she had vomited blood.

Momoda, after receiving the report, called for an ambulance at around 5:20 p.m. and said, “A girl isn’t breathing, and she is stiff.”

Police said Yuha was otherwise uninjured. The girl was found in the four-bedroom apartment in a room the size of eight tatami mats, which had an air conditioner and a fan.

The 15-year-old boy told police that the air conditioner and the fan “were on when I came home.”

When police arrived at the scene and checked the air conditioner, the temperature was set at 28 degrees.

Based on its structure, police believe it was difficult for a 2-year-old to climb out of it.

There was no food or drink inside the playpen, police said, and no solids were found in her stomach.

The city government held a news conference on June 30 and announced that Yuha has been deemed a “child in need of protection” based on the Child Welfare Law and under the watch of officials since October 2020.

Ono used to consult with the city about parenting, the city said. However, the city officials never visited her home.

Police said Yuha suffered psychological abuse when her father battered her mother in front of her in January 2020. She was not even 1 year old at the time.

Yuha has lived separately from her parents.

The city said it initially watched over Yuha in cooperation with a nursery school she attended.

But in June 2021, Yuha quit the nursery school because it was difficult for Ono to pick up and drop off the toddler due to her work.

In December the same year, the city lowered the level of risk for Yuha from “in need of protection” to “in need of support,” which means there are signs of abuse.

On June 15 this year, Yuha received a checkup and Ono was scheduled to tour a child care facility on June 30.

City officials said during the checkup they did not find any sign of notable malnutrition or growth insufficiency.