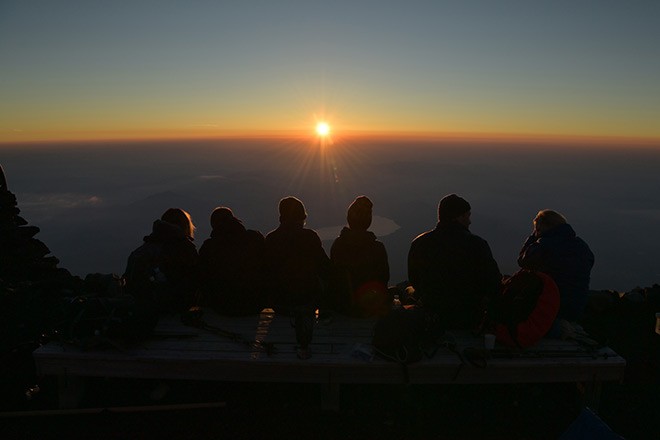 Climbers view the sunrise at the summit of Mount Fuji, where the climbing season kicked off in Yamanashi Prefecture on July 1. (Shinnosuke Ito)

Climbers atop the 3,776-meter summit of Mount Fuji expressed excitement when the bright sun rose against a cloudless sky on July 1 as the climbing season for Japan's tallest peak kicked off.

“This is the most beautiful sunrise I’ve ever seen," said Masayuki Kaburaki, 64, of Yokohama. "It's the first time I've seen the sun rise as a perfect circle since the sky is so clear.”

He has climbed Mount Fuji more than 20 times.

“Very nice. I will hold this memory for the rest of my life," said Nicole Jekel, 48, who is in Japan on business from Germany. He said his dream finally came true.

Climbers watched the sun rise from the summit at around 4:30 a.m. on July 1, when the Yoshida trail, a trekking route from the Yamanashi Prefecture side, opened for the season.

Many climbers take four routes from the fifth station of the mountain to the summit.

All routes are scheduled to be open until Sept. 10.

The four routes were closed in 2020 amid the novel coronavirus pandemic.

Last year, the routes were opened for the first time in two years, but the number of climbers dropped to about one-third of the figure in 2019.

Lodges on the mountain will take thorough measures to prevent coronavirus infections.

Climbers are asked to book reservations in advance, with the number of guests allowed halved. Some lodges are already fully booked on weekends and during the mid-summer Bon holiday period.

The Yamanashi prefectural government is asking climbers to fill out health check sheets beforehand. Climbers are then asked to show the sheet and take their temperatures at the fifth and sixth stations on the mountain.

They receive yellow wristbands if no problems are found, but if the climbers have temperatures of 37.5 degree or higher, or have a temperature one degree higher than usual, they will be asked to refrain from climbing.

Climbers are allowed to remove their masks, but they are asked to cover their noses and mouths when passing others.

The Shizuoka prefectural government will also ask climbers to check their temperatures and health conditions at the fifth stations of their three routes or at parking lots where climbers board shuttle buses. If no problems are found, climbers will receive wristbands.

Climbers are also asked to undergo medical checks at accommodation facilities in municipalities around Mount Fuji.