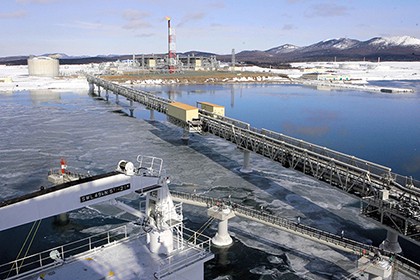 Karafuto, as Sakhalin was formerly known, was home to 400,000 Japanese before World War II.

On the eve of Japan’s defeat in August 1945, Soviet forces invaded Karafuto and seized its official installations, railways, schools and factories.

The Japanese word for “seize” (sesshyu) is written with two kanji characters which, by themselves, do no denote anything violent or sinister.

What actually occurred was nothing short of outright looting.

I hadn’t thought about this until I came across the word “sesshu” in media reports for the first time in a while.

Russian President Vladimir Putin was reported to have signed a decree to transfer the assets of the operator of the Sakhalin II gas and oil project partially being financed by Japanese corporations.

Japan has led the world in the use of liquefied natural gas since it began importing LNG for the first time in 1969. After the two oil shocks in the 1970s, LNG became as crucial as nuclear power as Japan moved to diversify its energy sources.

When the Great East Japan Earthquake of 2011 knocked nuclear power plants out of operation, LNG’s role as an energy source became even greater.

Chilled to an ultra-low temperature of minus 162 degrees, LNG is transported by thermos-like tankers to be used as city gas for daily cooking and to generate elecrtricity indispensable to the operation of air conditioners and refrigerators.

In short, LNG is a veritable lifeline.

As a resource-poor nation, Japan has always struggled to secure energy sources.

Prior to the Soviet invasion, attempts were made to drill for oil in Karafuto, too.

LNG always had an edge over oil in terms of the diversity of import sources. Putin’s latest move has left a big question mark with regard to the future of Sakhalin as a supply source.

“Don’t put all your eggs in one basket,” goes an old maxim. The current situation is a painful reminder of the importance of risk-spreading.

Destroyed completely is the illusion that globalization through trade and investment will create a friendlier world.

How do we deal with nations that have no intention of honoring the rule of law? What a truly difficult era we are now in.