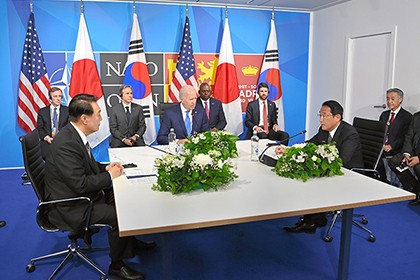 When relations between two countries become strained due to long-running touchy bilateral issues, it is all the more important for the leaders to talk for as long as it takes to resolve matters.

But if the leader of such a country is preoccupied with his political standing at home, the chances of any sticky problems being solved will only get slimmer.

International conferences offer good opportunities for bilateral meetings. The two leaders could have held talks during the summit if they had both had the will. But they did nothing but chat for several minutes while standing during a banquet.

The bilateral relationship has been frosty for so long. It is a great pity that the two leaders, who inherited this unwanted diplomatic legacy, squandered a marvellous opportunity to hold talks and regenerate the momentum for an improvement in bilateral ties.

Yoon’s government was willing to hold a meeting between with Kishida to stress its different stance toward Japan from that of the previous administration of Moon Jae-in.

But the Yoon administration has yet to make any proposal to solve the issue of compensation for former Korean wartime laborers, known as “choyoko” (drafted workers), the biggest obstacle to improved Tokyo-Seoul relations. It has not yet even started talking with plaintiffs of lawsuits seeking compensation from Japanese companies.

In contrast, the Kishida administration remained cautious about a summit with South Korea.

The administration has said it needs to wait for the current South Korean government’s response to the choyoko issue before deciding whether the time is ripe for a bilateral summit. But it actually seems to be more concerned about the potential impact of a Kishida-Yoon meeting on the July 10 Upper House election.

It apparently wanted to avoid upsetting conservatives at home, including the right wing of the ruling Liberal Democratic Party, during the election campaign.

Kishida cannot develop and execute a diplomatic strategy based on a broad, long-term vision if he places higher priority on protecting his political power base than mending Japan’s ties with its neighbor.

The chill in the bilateral relationship is not just a problem for the two countries. A slew of tough challenges facing the international community strongly demand swift and effective actions to fix the ties.

The security threat posed by North Korea is an urgent issue that the two countries should be working on together. The first trilateral meeting of the leaders of Japan, the United States and South Korea in about five years, held on the sidelines of the NATO gathering, reconfirmed the importance of security cooperation among the three nations in addition to their shared recognition of the threat from Pyongyang.

The Japan-South Korea relationship is the weakest link of the triangle of relations among the three countries, which share the same values of freedom and democracy. The leaders of Japan and South Korea should at least try to build on their exchange of greetings in Spain to make the link thicker and sturdier.

After chatting with Kishida, Yoon said the Japanese prime minister had left a good impression on him. South Korean Foreign Minister Park Jin is expected to visit Japan in July. His Japanese counterpart, Yoshimasa Hayashi, is considering a meeting with Park during his visit. Both sides should promote bilateral dialogue at a range of levels.

With regard to private-sector exchanges between the two countries, a flight route between Tokyo’s Haneda airport and Seoul’s Gimpo airport, both located close to a city center, recently reopened after a suspension of two years and three months due to the novel coronavirus pandemic. Citizens of both countries are keen to start traveling back and forth as they did before the pandemic.

But regular mutual reciprocal visits by the Japanese and South Korean leaders have remained stalled for over 10 years. Kishida and Yoon should start by reviving regular summitry in their joint efforts to cure the chilly relationship between the two government that offers no benefit to either side.