LDP lawmakers receive pamphlet that says being gay is ‘disorder’ 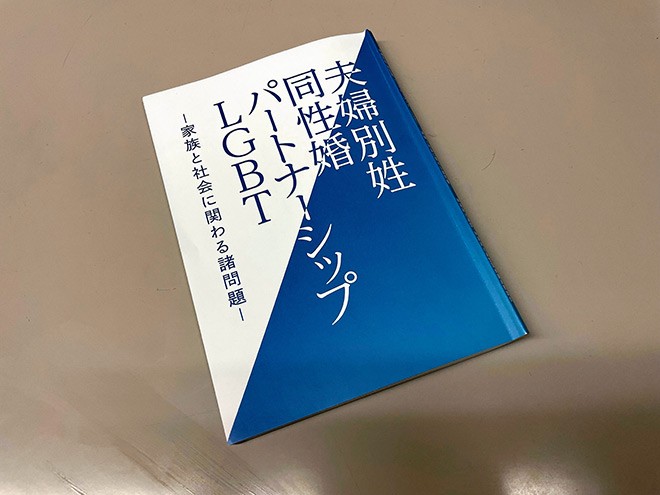 A pamphlet that recently made the rounds of lawmakers belonging to the ruling Liberal Democratic Party described sexual minorities as suffering from an “acquired psychological disorder” that is just as addictive as gambling.

According to sources, the pamphlet was among documents distributed at a June 13 gathering held at a Tokyo hotel of LDP lawmakers belonging to a group who share a similar ideology to that espoused by Shinto Seiji Renmei (Shinto Association of Spiritual Leadership), made up of thousands of individuals affiliated with Shinto shrines around Japan.

The pamphlet, which ran to 90 pages or so, contained excerpts of speeches given by university professors and others about same-sex marriages or allowing married couples to choose separate surnames. The speechs were made during study sessions organized by Shinto Seiji Renmei.

It states that homosexuality is not an inherent condition but an acquired one that, similar to gambling addiction, can be kicked if a person has a strong enough desire to do so.

Takeharu Kato, an openly gay lawyer who has led plaintiff groups in lawsuits on the issue of same-sex marriages, said, “The thinking that homosexuality is some sort of illness was rejected years ago, so the clear inclusion of such a passage is, to me, an expression of prejudice and animosity.”

A recent survey of candidates running in the July 10 Upper House election by The Asahi Shimbun and a team led by Masaki Taniguchi, a professor of political science at the University of Tokyo, found that the LDP, led by Prime Minister Fumio Kishida, is lagging far behind other political parties in backing legislation to promote understanding of sexual minorities.