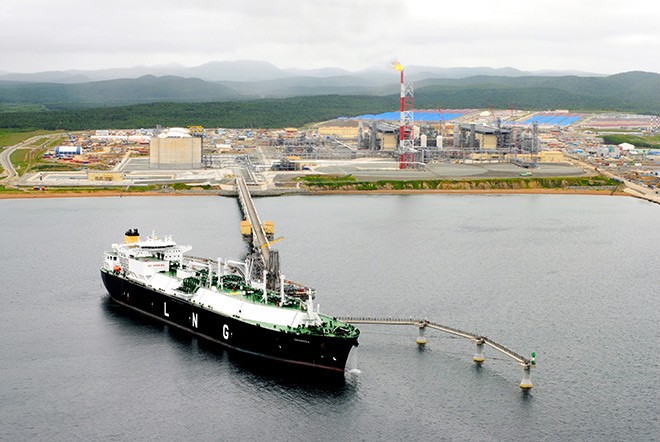 The electricity crunch experienced in the greater Tokyo metropolitan area earlier this week may simply have been a harbinger of worse to come.

That scenario is now playing out as Russia raises the ante on liquified natural gas shipments to Japan.

President Vladimir Putin was reported June 30 to have signed a decree to transfer the assets of the operator of the Sakhalin II liquified natural gas project in which two Japanese trading companies have a stake to a different Russian company. The decision sent shock waves through government and company offices in Tokyo.

Prime Minister Fumio Kishida told reporters the order would not lead to an immediate stoppage of LNG shipments from Russia to Japan.

However, the possibility remains that Moscow could order the Japanese companies to be removed from the new corporate entity.

Of Japan’s LNG imports, 8.8 percent came from Russia in 2021, with most of that being supplied by the Sakhalin II project.

LNG is used in thermal power plants in Japan. Those facilities account for about 40 percent of the electricity generated.

If electric power and gas companies feel compelled to seek alternative sources of LNG through the international spot market, where prices are already surging, Japanese households will have to brace for even higher electricity and gas bills.

Electric power companies just recently announced they would raise their fees from August to the highest level in five years.

And with scorching heat from late June, the government on July 1 issued a request for businesses and households nationwide to be more frugal in energy use. It was the first such request in seven years.

Utilities are working to resume operations at power plants that had been taken off line.

But even if those plants are restored to full operation, another energy shortage may well occur if LNG import shipments stop.

“Russia obviously knew what the situation was in Japan,” said an executive of an energy-related company. “(The presidential order) is the ultimate move to play havoc with Japan.”