EDITORIAL: China has choked off Hong Kong’s freedom through ‘Sinicization’ 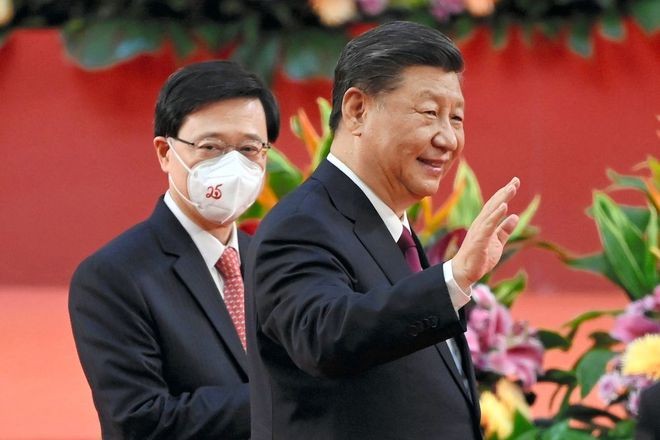 The freedom of the people of Hong Kong has been forcefully taken away. This grave fact cannot be obscured by any amount of Chinese propaganda to justify Beijing’s outrageous actions in recent years.

July 1 marked the 25th anniversary of Hong Kong’s handover to China in 1997, which ended Britain’s colonial rule of the city since the 19th century.

For many Chinese citizens, the symbolic anniversary may have come as a bitter reminder of the humiliation inflicted on their country by imperial powers. Some Chinese may have felt proud of their country’s development into a leading power in the past quarter-century.

When we focus our attention on the changes that have taken place in Hong Kong since its reversion to Chinese sovereignty, however, we should be disturbed by the enormity of what the city has lost.

The Chinese Communist Party has forcefully pushed through the “Sinicization” of Hong Kong, destroying the freewheeling spirit of the city, which should have been protected under the “one country, two systems” formula.

The communist government in Beijing has enacted new national security legislation without allowing Hong Kong’s involvement in the process and used it to detain Hong Kong citizens calling for democracy and the protection of human rights.

Gatherings to mourn the victims of China's bloody crackdown on pro-democracy protests in Tiananmen Square in 1989 have been banned, while a newspaper critical of Beijing has been forced to cease publication.

The electoral system in the territory has been radically changed to prevent people expressing dissenting opinions from taking part in the political process. Now, residents of Hong Kong are leaving the city in a mass exodus.

The communist government calls this disturbing situation in Hong Kong “a success” but that is a view shared by nobody else.

Deng Xiaoping, who was China’s paramount leader when Beijing officially adopted a policy to take over Hong Kong under the one country, two systems policy, said the city would remain unchanged for 50 years after the handover, an official position stipulated in the 1984 Sino-British joint declaration on the issue.

By taking a series of actions that blatantly violate this principle, China has betrayed its international promise.

In a ceremony to mark the 25th anniversary held on July 1 in Hong Kong, Chinese President Xi Jinping asserted that under the one country, two systems framework, “safeguarding national sovereignty” is of the highest priority.

Xi seems to think that he can justify China’s suppression of democracy in Hong Kong by stressing this point, but he is making a serious mistake that only harms both China and the world.

The world order will collapse if major powers are allowed to get away with the high-handed act of unilaterally violating their promises in a selfish manner. This is the fear being felt by the world as it witnesses what is occurring in Ukraine.

Xi likes to stress the principle of “patriots administering Hong Kong.” But patriotism can mean many things. The Communist Party’s philosophy of governing totally lacks the recognition of human rights.

It has been reported that participants in the anniversary ceremony were forced to quarantine in advance to prevent Xi from contracting the novel coronavirus. This can only be described as preposterous.

Let us share the distress felt by people in Hong Kong. We should continue thinking about the fate of Hong Kong as a matter of our own concern while hoping that its freedom and democracy, how badly they may have been crushed, will someday come to life again.