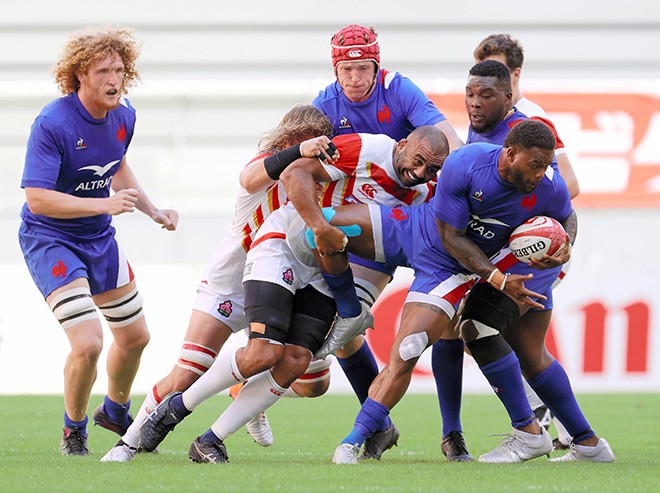 Japan’s Michael Leitch, center, tries to stop a French drive in the first half of a test match at the Toyota Stadium in Toyota, Aichi Prefecture, on July 2. (The Asahi Shimbun/ Wataru Sekita)

TOYOTA, Aichi Prefecture--Winger Damian Penaud scored two tries as France put together a strong second-half performance for a commanding 42-23 victory over Japan in the first test at the Toyota Stadium in Aichi on Saturday.

The two countries were level at 13-13 at half-time after a sprightly first half display by the hosts but the strength and fitness of the French proved decisive in the second period in swelteringly hot and humid conditions which dictated several water breaks.

Penaud took his international try tally to 18 but it was the triumphant return of flyhalf Matthieu Jalibert after serious injury that marked the French success.

A thigh tear had kept the 23-year-old out of the team for the last eight months but he reminded spectators of his class in setting up two of the five French tries, while fullback Melvyn Jaminet added 17 points with his boot.

Jalibert wasted little time in making his mark with a quick-thinking long pass out to Penaud on the wing for the first try inside the opening two minutes.

It was expected this would set the tone for a dominant performance by the visiting team, despite leaving many of their Six Nations-winning team at home for the tour, including World Player of the Year Antoine Dupont.

But Japan, which had four regulars out with COVID-19, had other ideas with an attacking approach as they more than matched the French flair and Tatafu’s try put them 10-7 ahead after 14 minutes.

Kicks on either side then ensured parity at half-time.

After the break, Jalibert’s decisive break set up Lebel and effectively ended the home resistance as France went ahead in the 46th minute and did not look back.

France showed power though the midfield as Moefana broke through for Penaud to finish in the 58th minute and three minutes after Moefana scored a super individual try, with a weighted chip over the top of the Japan defense and a quick collection to go over.

A forward drive 12 minutes from time ensured a fifth try as replacement hooker Bourgart drove over the line but there was a last gasp consolation for Japan with Fifita finishing.

“We were up against a very spirited Japanese team, who played lively rugby. We managed to respond and got the upper hand as we went along but I think we have to improve in all areas for next week,” said French coach Fabien Galthie.

The two countries meet again next Saturday in the second test in Tokyo.