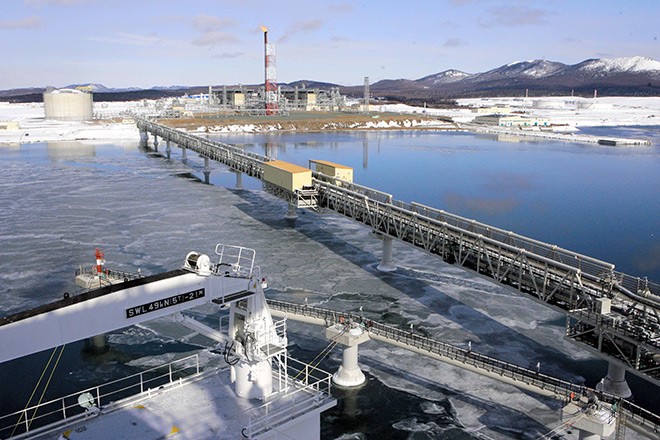 LONDON--Russia announced a decree that seizes full control of the Sakhalin-2 gas and oil project in the country’s Far East, a move that could force out Shell and Japanese investors and adds another bullish factor to prices in a tight global LNG market.

The order, signed Thursday, creates a new firm to take over all rights and obligations of Sakhalin Energy Investment Co, in which Shell and two Japanese trading companies Mitsui and Mitsubishi hold just under 50 percent.

In Tokyo, Prime Minister Fumio Kishida said Russia’s decision would not immediately stop LNG imports from the development. The same message was echoed by the Kremlin that Russia sees no grounds for LNG supplies to stop.

The immediate impact was yet to be seen in the global LNG market, already tightening further due to reduction of Russian supplies to Europe, curtailed U.S. supply due to a key plant outage and rising demand in Asia. However, the move poses an upward price risk, especially for Japanese buyers.

The average LNG price for August delivery into Northeast Asia

LNG prices have recently jumped some 60 percent and could exceed $40 per million British thermal units (mmBtu) soon. If the global backdrop tightens further, benchmark values will be within reach of record levels near $60 seen earlier this year.

Here is a summary of analyst comments:

“Japan is expected to be the biggest loser from being kicked out of Sakhalin,” said Robert Songer, LNG analyst at data intelligence firm ICIS. “Sakhalin 2 exports for the first six months of 2022 stood at 5.81 million tonnes (mt). Of this Japan’s share was 3.45 mt, followed by South Korea at 1.15 mt and China at 0.84 mt.”

“Admission to the new company will require the current joint venturers to agree to Russia’s conditions, which is unclear and could, evidently, be subject to change. If one of the current joint venturers is not admitted to the new company, their stake will be sold off and held in a special account, from which Russia will deduct damages. The basis of this deduction is also unclear.

“In the near term, chances are they will continue to supply to long-term contracts. However, the absence of any international partners with LNG experience also poses downside risk to their production, especially if they run into an unplanned outage or maintenance, after which sanctions could complicate the import of technology to conduct repairs.

“Rystad sees long-term downside risk for the entirety of current Russian production, including Sakhalin-2 and Yamal, which is around 30 million tons. or around 7 percent of global production. The magnitude is so large that the recent sanctions of Plaquemines and Corpus Christi Stage 3 have only balanced this out to 2030.

“Considering the current outlook for LNG demand and production, we still see a 100 Mtpa supply gap in 2030. However, if Russian production drops to zero, this could add another 30 Mtpa of deficit. This is a very bullish environment for LNG given Europe’s demand as they pivot away from Russian gas.”

“This heightened political risk may help to maintain and maybe increase the risk premium within the LNG price curve.

“The recent action vis-a-vis Sakhalin 2 raises questions regarding Moscow’s intentions toward the much larger 17.4 million tons per annum (mtpa) Yamal project, as well as the massive pipeline of new Russian projects, exceeding 30 mtpa.

“Collectively, this is creating an air of uncertainty around almost 60 mtpa of existing and planned (post-FID) capacity. These projects will be harder to develop, maintain and operate without foreign partners’involvement and active support, which is being undermined by the takeover of SEIC.”