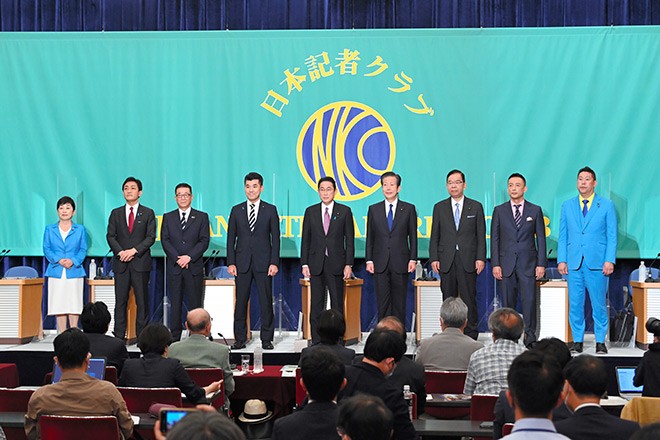 The leaders of nine political parties gather at the Japan National Press Club in Tokyo on June 21 for a debate. (Takuya Isayama)

Few candidates campaigning in the July 10 Upper House election are even bothering to pitch COVID-19 as an issue, reflecting dwindling interest among voters as new cases have yet to hit alarming levels.

The approach is the same, whether it be with Prime Minister Fumio Kishida’s Liberal Democratic Party or parties in the opposition bloc.

But with clear signs of a rebound in cases in recent weeks, ignoring the trend could jeopardize a government plan to revitalize the battered tourism industry with the launch of a travel discount program, possibly from the first half of July.

COVID-19 is not a suitable topic for candidates giving stump speeches as the pandemic is no longer a pressing concern for voters, a senior LDP official said.

“Since caseloads are not as high as before, the topic does not resonate with voters,” said a party official.

Kenta Izumi, who heads the CDP, is more concerned about government steps to combat the soaring cost of living. The nation’s security is another concern.

Ichiro Matsui, the head of the opposition Japan Innovation Party who had a front row seat tackling the public health crisis as mayor of Osaka, hardly touched on the topic when he gave campaign speeches on behalf of his party’s candidates.

A nationwide opinion poll taken by The Asahi Shimbun on June 22-23 found that only 5 percent of voters would cast their ballots based on how a candidate or party approaches the COVID-19 issue. The survey allowed respondents to choose from four answers.

The most common choice was the economy, at 43 percent, followed by social security concerns, at 33 percent, and diplomacy and national security, at 15 percent.

Mirroring voters’ concerns, Kishida has focused during his speeches while campaigning on behalf of LDP contenders on laying out measures to rein in prices of goods and demonstrate he is tackling thorny diplomatic issues.

He scrambled to announce the plan to set up a government agency to fight new infectious diseases and a Japanese version of the U.S. Centers for Disease Control and Prevention in time for the June 22 start of official campaigning for the Upper House election.

But he has devoted little time to explaining the envisioned bodies as he knows full well that COVID-19 ranks low on the list of campaign issues voters are most concerned about.

But now, things may change. Even if the issue remains on the back burner until voting day, it may return to the front row of a flurry challenges that the Kishida administration will need to tackle urgently after the Upper House election.

Tokyo on June 29 reported 3,803 daily new cases, an increase of 60 percent from a week earlier. It was the first time in a month for the capital to report daily new cases above the 3,000 mark.

The following day, an expert panel with the health ministry determined at a meeting that the trajectory of nationwide cases was now on an upward trend after hitting bottom.

That inevitably will call into question the government's tentative plan to go ahead with a program to provide discounts for those on sightseeing trips around the country from the first half of July.

When Kishida hit the streets July 2, he tried to woo voters to his party by underscoring the significance of the travel discount program.

But some administration officials are now urging caution in light of the rise in new cases.

One official indicated the administration will adopt a wait-and-see approach toward the program after the election.

Kishida is fully aware of what to expect if the government fails to stem a steep rise in COVID-19 cases. His two immediate predecessors, Yoshihide Suga and Shinzo Abe, came under heavy fire from the public for their failure to contain the pandemic.

The rebound in new cases at this stage came as an unexpected development for the Kishida administration.

“We expected daily cases to move forward in low numbers,” a ranking administration official said, signaling alarm that a new wave of infections could pound the nation.

(This article was written by Kohei Morioka and Kazutaka Kamizawa.)