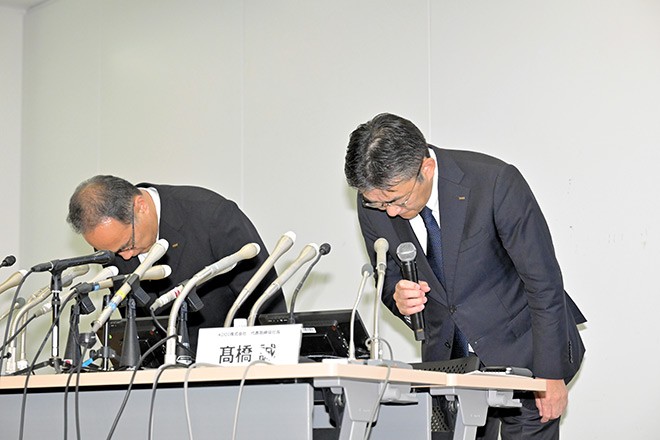 KDDI Corp. President Makoto Takahashi, right, apologizes for a massive breakdown in the company’s ability to provide mobile and online services during a news conference in Tokyo’s Chiyoda Ward on July 3. (Takayuki Kakuno)

Cellphone carrier KDDI Corp. said July 3 that nearly 40 million mobile connections were snarled by a nationwide glitch that surfaced in the early hours of the previous day.

“As a telecommunications company dedicated to supporting social infrastructure and providing a stable service, we deeply regret the breakdown,” KDDI President Makoto Takahashi told a morning news conference in Tokyo, describing the incident as the company’s largest to date.

KDDI said earlier that a failure in part of its system to convert voice to data was responsible for the outage. As the unprocessed data accumulated, communications became overwhelmed, forcing KDDI to curb its transmission of data to keep other services intact.

The company announced July 3 at noon that services in western Japan had been recovered by 11 a.m.

It confirmed that those in eastern Japan were restored by 5:30 p.m.

The total number of lines affected stood at 39.15 million. The figure included 35.8 million mobile phone lines, 1.4 million set aside for the mobile virtual network operator and 1.5 million for Internet of Things.

Takahashi said that up to 260,000 companies--including those in logistics, banking and transportation--were affected by the outage.

He said KDDI, one of three major carriers, will consider compensating individual customers and businesses that were affected.