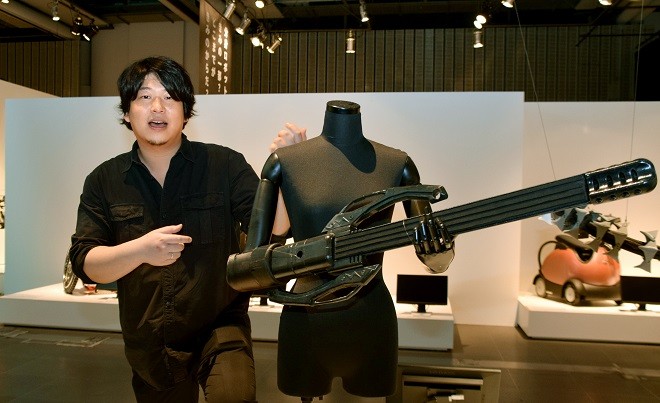 Seeking a sense of “cool” and inspired by the “Fullmetal Alchemist” anime series, an engineer has created musical instruments that can be worn like prosthetic arms.

When he heard a disabled person say it was difficult to play music, Hatakeyama came up with the idea to combine musical instruments with artificial limbs.

He yearned for cool-looking prosthetics that could be freely manipulated, like the “automail” limbs featured in “Fullmetal Alchemist.”

Using his sound-designing experience as a member of a musical band, Hatakeyama started the project in 2017. He continued to add improvements through interviews with about 20 users.

The project, conducted while Hatakeyama was working at an IT company, resulted in the MusiArm instrument series for disabled people.

Currently, six models, including string, percussion and keyboard instruments, are available for people who have lost their forearms. Weighing 800 grams or less, they can each be played with the opposite hand.

Some of the MusiArm instruments are on display at the “You and Robots” exhibition running at the National Museum of Emerging Science and Innovation (Miraikan) in Tokyo’s Koto Ward. The Asahi Shimbun is one of the organizers of the exhibition.

The instruments were also used in the Closing Ceremony of the Tokyo Paralympics last year.

Hatakeyama’s interest in developing prosthetics goes back to his childhood, when he saw a TV program about children who lost limbs to land mines. He wanted to make prosthetic limbs for them so that they could play outside like he and his friends were doing.

For the MusiArm limbs, Hatakeyama was adamant about making the instruments easy to play.

The guitar creates sounds when rubber strings are pressed and changes tone when the instrument is tilted.

The trombone is played by sliding the accompanying socket.

“I may be able to make a prosthetic arm that the wearer can use to play darts and a prosthetic foot that serves as a musical instrument,” he said. “I don’t want people to have to give up their dreams. I want to help them become what they want to be.”